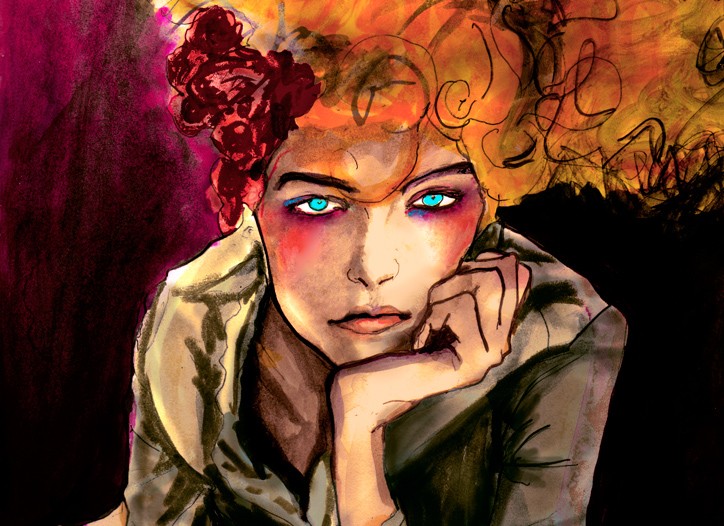 Danny Roberts is something of a modelizer — but not the slick sort who’s always dating them. He draws them, and over the last year Roberts has posted several hundred portraits of catwalkers in clothing from Donna Karan to Alexander McQueen on his blog, Igor + André.

“Fashion is kind of a door into a dream world for me,” says Roberts, 24. “Seeing a fashion collection is like picking the wardrobe for the story that is being written in my head.”

“Natural beauty and women inspire me more than anything,” he says. “I would say romance is a real driving force in my work.”

His soft, ethereal artistic style belies the sharp business acumen he’s been honing since a young age. In kindergarten, Roberts performed handstands for candy money. In first grade, he drew comic books and sold them to high school students. Later, while living opposite a golf course, he launched a company called The Dirty Dozen, which repackaged and sold stray golf balls back to golfers, and by 13 he was running a small iron-on T-shirt line called Sticky Monkey, which lasted eight years.

His formal education included a brief stint studying photography at Cal Poly, San Luis Obispo, before transferring to San Francisco’s Academy of Art University, where he took classes in fashion design and fashion illustration. That’s when his obsession with models began.

“I didn’t know who Lily Cole or Gemma Ward were, and then one day in my first year of college, I saw a picture of Gemma and I froze, because she looked just like my drawings,” says Roberts, who has sketched more than 100 versions of Ward and Cole. “The same thing was true with Lily. It was like seeing my drawings come to life.”

As it turns out, Sophie Ward — sister of Gemma and an aspiring writer and publisher — has become a close confidante. The two plan to publish an illustrated children’s book through Paper Castle Press called “The Ginger Marmalade Toastmeister.”

Roberts’ fascination with models surely has to do with their flawlessness, but that’s the one quality he hopes isn’t conveyed in his work. “The more perfect the image, I think, the less people can connect with it,” he says. “People are drawn to imperfections.”