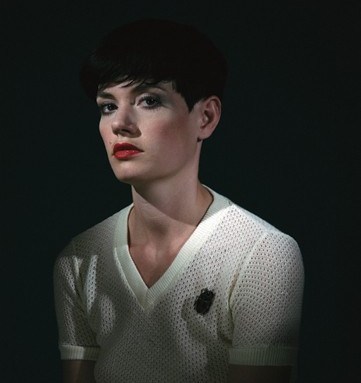 Faces to watch from around the globe.

Battant, French for fighter, is the name of Chloé Raunet’s band and it matches the 27-year-old singer’s energetic personality. Born and raised in Vancouver, the pretty brunette has been involved in music practically since she could stand up. Her parents started her on the Suzuki violin program when she was two years old, and she’s composed poems and songs since she could hold a pen. But it was her move to London, at 17, that really got her into action, and she started her own band with the underground local figure Mole in 2005. Battant, her new London-based trio, includes guitar player Tim Fairplay and Joel Dever on synthesizer. Raunet sings and writes the lyrics. “I have a pretty wild imagination, and most of what I’m trying to say is cloaked in heavy metaphor,” she says. Produced under the French label Kill the DJ, Battant’s first album, No Head, was released this year and became an instant hit. Fans love the urgent vitality of the band’s electro-rock music and its charismatic singer, even though, with her boyish haircut and black jeans and T-shirts, Raunet is hardly a seductress. “I’m a fan of any woman who makes it in music without relying solely on her sex appeal,” says the androgynous singer, who is a fan of Kim Deal, Billie Holiday and Janis Joplin. Battant is working on a second album. —Chantal Goupil

Martina Stella got an early start in the acting business when at 16 she starred in Gabriele Muccino’s film L’Ultimo Bacio (The Last Kiss). Eight years later, Stella hopes to make headway in the international film industry with Nine, a Rob Marshall–directed film, slated for a November release. Nine was inspired by the Broadway musical, which in turn took its cue from Federico Fellini’s cult movie, 8 1/2. In it, Stella plays an “ironic and fun Italian girl,” reciting alongside such icons as Sophia Loren, Judy Dench and Marion Cotillard. “It was the first time I was on the set with such legendary actors, and many of my scenes were with Daniel Day-Lewis. It was a bit like being back in [acting] school,” muses Stella. To help bolster her career, Stella just got an apartment in London so she “can learn English even better—you know, slowly work on my accent.” As for aspirations, she says her dream would be to work with French or American directors, citing Sofia Coppola as one. Fashionwise, Stella says she prefers comfort and simplicity to excess bling, but likes to slip into evening numbers by Roberto Cavalli and Dolce & Gabbana for the red carpet. “For me, fashion is fascinating and fun, and when I have to dress for an event, there are so many great designers to choose from,” she says. —Rachel Mascett

A mix of Sixties soul, pop and funk with a touch of reggae thrown in for good measure — there aren’t many influences Oceana’s debut album, released May 1, doesn’t contain. But considering how eclectic her background is, it’s not so surprising. Her father is a musician from Martinique, and her mother is a fashion designer from Germany who has worked in Paris for Christian Lacroix, Chanel and Jean Patou. The 27-year-old Oceana has inherited both parents’ musical and sartorial talents. Her favorite fashion labels are Xuly Bët, Azzedine Alaïa and Paco Rabanne. And her funky approach to style is evident in her saucy lingerie-style dresses, with the occasional trilby perched on top of an enormous blonde afro, making her modern Germany’s answer to Pam Grier—a breath, or rather a blast, of fresh air after all the bland Heidi Klum look-alikes usually being wheeled out. —Damien McGuinness

If her fellow Girlfriend Model Search alumni are anything to go by, Kate Budrodeen has big things ahead of her. The 15-year-old, who hails from Sydney’s Northern Beaches, is the 2008 winner of the national Australian model scout competition—a joint venture between Pacific Magazines’ teen title Girlfriend and Sydney’s Chic Management model agency. Budrodeen has won contracts with both Chic and its New York affiliate agency, Next, which have guided the highly successful careers of past GMS winners Catherine McNeil, Abbey Lee Kershaw, Sarah Stephens and Alyssa Sutherland. With her braces off last month and first test shots just done, Budrodeen has yet to book a single job. But Chic Management believes she has enormous potential, particularly in the cosmetics arena. —Patty Huntington