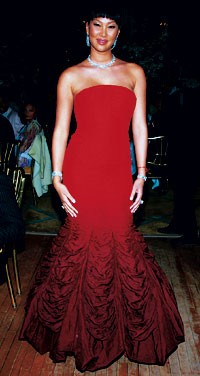 With spring in bloom last Thursday, it was only fitting that Lilly Pulitzer arrived with daughter Liza for a lunch at Saks Fifth Avenue to celebrate her new book, “Essentially Lilly.” Her wild and colorful prints graced everything from the tablecloths to the teacups, but didn’t stop there. Guests like Blair Husain and Kalliope Karella trotted out the first pastels of the season and even Pulitzer was overcome by the floral tribute. “I’ve never seen anything more beautiful than this,” she gushed.

A few blocks away, Anna Zegna hosted a lunch for the Agnona women’s line at La Grenouille attended by Jacqueline Schnabel and Serena Boardman. For the fashionably minded, soirees abounded, as Celerie Kemble and Cynthia Lufkin made their way later that night to a cocktail party at the Celine boutique for the Lenox Hill Neighborhood House.

The previous evening, at a performance by the Martha Graham Dance Company of Graham’s “The Owl and the Pussycat” at City Center, narrator Andre Léon Talley told of the unlikely pair that “danced by the light of the moon.” At the gala following the performance, Rachel Feinstein and John Currin, Anne Bass, Eliza Reed Bolen and Oscar de la Renta had to settle for dancing by the honey-colored lighting of the Plaza Hotel. Though Talley seemed as comfortable onstage as he does in a bespoke suit, he wasn’t anticipating any more performances in his future. “I have already chosen my career, and I am a fashion editor,” he announced grandly.

The evening’s chair, Kimora Lee Simmons, resplendent in Zac Posen, explained why she had to have her perfectly fitted gown made-to-order. “Honey, I’ve had two kids — I don’t fit into couture,” she quipped.

Downtown, the TriBeCa Ball’s “La Dolce Vita” event called for “sexy chic attire.” Christian Dior USA president Marla Sabo, clearly inspired by a recent trip to Latin America where she was scouting store locales, arrived in a red lacquered Dior dress. Amidst the glittering social crowd of Sally Albemarle, Jennifer Creel and Lauren du Pont, the diminutive but ever plucky Dr. Ruth Westheimer arrived in neither sexy, nor chic, attire. However, that didn’t stop the sex talk. When pressed by a gentleman to address his libidinal issues, Dr. Ruth groused, “I don’t want to talk about your sexual problems.”