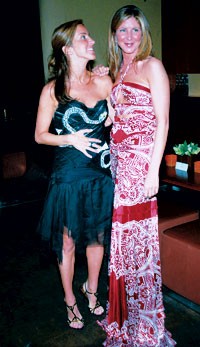 It wasn’t just Ladies’ Night at BLVD for the International Neuroscience Foundation benefit, chaired by Laurie Prince; her sister, Liz Cohen; Lulu de Kwiatkowski, and Samantha Boardman, among others, and sponsored by Gucci. As Tom Ford’s final runway shows played on TV screens throughout the club, Alexandra Shiva relaxed on a banquette with husband Jonathan Marc Sherman and their friend and “Station Agent,” star Peter Dinklage; Jackie Astier debated bidding on a weekend in Casa de Campo with her husband, Jean-Francois, and Alexandra von Furstenberg dropped in with Tim Jefferies.

And though they tried their hand at winning bags and baubles, even the worst dates knew to steer clear of one item on silent auction: $600 worth of Botox injections from Dr. Bradford Katchen. The minimum bid was $150, but by late into the evening, it hadn’t received a single legitimate one. After all, who wants to own up?

The next night, Dayssi Olarte de Kanavos, Renée Rockefeller, Lauren Shortt and Stephanie Winston Wolkoff hosted a benefit for New Yorkers For Children at the Mandarin Oriental, sponsored by Valentino. Ivanka Trump, Lillian von Stauffenberg, Aerin Lauder, Zac Posen and Karolina Kurkova joined Tory Burch, Liya Kebede and Susan Fales-Hill to celebrate the oft-not-celebrated April Fools’ Day. It all made Kalliope Karella wonder if she’d been the butt of an April Fools’ joke earlier in the day. “The New York Times called to interview me about my new book,” Karella said, referring to “Weddings of Style,” which is out next month. “But now I’m wondering if someone was just playing a trick on me.”

The hosts had an even more glamorous prank in mind. The guest’s place card with a special symbol on its back would win her a diamond ring. (Gilan provided many of the evening’s jewels.) After much kerfuffle, an ecstatic Rena Sindi went to the podium to collect her prize. “I can’t believe I’ve won twice in a row,” said Sindi, who’d been awarded a necklace at the Save Venice ball just a few weeks prior.

It was then that a gleeful Olarte de Kanavos announced, “Actually, we’re just playing an April Fools’ joke on you.” Sindi’s shock didn’t last for long — the pair went back to their tables in a fit of giggles.