The two former Vogue editors have started their own fashion consultancy, which they’ve dubbed La Marque or, chicly, “The Brand” in French. 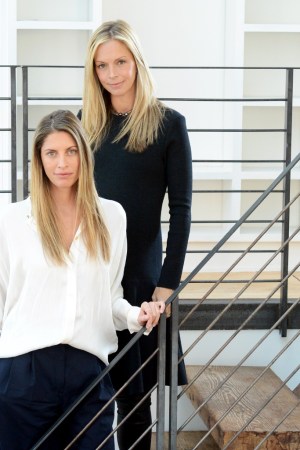 Meredith Melling Burke and Valerie Boster are out to make their “marques.”

The two former Vogue editors have started their own fashion consultancy, which they’ve dubbed La Marque or, chicly, “The Brand” in French (naturellement). They’re the latest to join a jam-packed field of fashion consultancies. Among their first four clients is Andrew Rosen, who has retained them for Theory.

In September, WWD reported the two were leaving a magazine where they had spent a combined 26 years — 16 years for Burke, all of her 20s for Boster — for an undisclosed project. The news came as a surprise to many not just because they, especially Burke, were so associated with the magazine, but because a departure from Vogue is as rare as a solar eclipse.

Here’s Boster summing up their new business: “We’re focused on branding, positioning and messaging, giving companies a brand narrative and keeping that message consistent and broadcasting it across numerous channels.” That didn’t come from a prospectus. Two weeks before the company’s launch, Burke, 39, and Boster, 34, were in Burke’s living room in her sprawling Astor Place apartment sitting side by side, fashion’s Cagney and Lacey, sounding less like two magazine editors and more like lifelong marketers.

“We tend to complete each others’ sentences,” Burke said.

Originally from Weston, Mass., Burke, formerly Vogue’s senior market editor, came to the magazine first on the advertising side as a merchandiser, working for then-publisher Ron Galotti, until it just so happened the church side of the equation was looking for a merchandising editor. Boster, a native Upper East Sider and Convent of the Sacred Heart alum, interviewed to be Burke’s assistant but ended up in that role for Virginia Smith, now the fashion market and accessories director. One of Burke’s main responsibilities was working with the CFDA/Vogue Fashion Fund, for which she nurtured several finalists, like Jason Wu and Rag & Bone.

“She had an understanding of when it was time for, not only for her to see a designer, but also when to bring them to the attention of other people here at the magazine,” Smith said. Burke was the one of the first editors to see Wu’s collection back around 2007 and later brought him to the attention of Roopal Patel, then at Bergdorf Goodman, which picked up his collection.

“She’s been a fashion big sister to me,” Wu said.

Marcus Wainwright of Rag & Bone, who considers Burke a friend, said she was useful as a sounding board or to facilitate a relationship, like getting help to meet Ralph Lauren. “I remember her bringing Kate Bosworth to one of our shows,” he said.

Burke and Boster said the decision to leave the magazine came out of a realization that the fashion industry was going through an evolution.

“Retail’s changing. Publishing’s changing. And so we felt it was a good time for us to capitalize on that intersection of content and commerce, where our voice could be an asset in that arena. Brands now more than ever have much more power to serve their product and reach consumers in a number of different ways beyond traditional media,” said Boster, who had been bookings editor at Vogue.

Going from the magazine into full-fledged marketing isn’t that big of a leap after all, since Vogue editors admittedly already serve that kind of function, less as gatekeepers and more like cheerleaders of the industry.

“Both young designers and established brands frequently come to us for advice, for design advice or collaborations,” Smith said. “We’re always giving this kind of counsel. It’s similar to a consultancy and that will be valuable to them [Burke and Boster] in what they’re doing now.”

Burke said they didn’t formally set up their company until they had walked out the door of 4 Times Square for the last time in October.

“One of the things that was really our intention was to never conflict our time at Vogue with our next venture. When we were at Vogue, we were 110 percent at Vogue. While in our heads we might have an idea of what we were going to do, we weren’t having conversations with anyone,” Burke said. “We left Vogue with a clear concept but with none of the executional component out of respect to [Anna Wintour] and the magazine.”

Burke and Boster speak of their former employer like they’re recovering from Stockholm syndrome, lest they offend a highly visible platform that will be vital to the success of their four clients, which also include French bridal and eveningwear brand Delphine Manivet; the swimwear line Cover, and Edition01, “a product and distribution platform” that works on collaborations between designers and retailers. They’re still friendly with the magazine, of course — they were right there, like old times, at the premiere of its new cable series about the CFDA Fashion Fund.

With their company, the women intend to be a full-service, one-stop shop — styling, creative direction, brand extensions, social media, even, according to their press materials, “visual research and contextualization.”

Burke said finding talents and developing them into brands was already what she was doing at the fashion fund. “That hunger, that appetite we have for knowing and being a library of information on the industry, whether it’s fashion designers or restaurants or cool, upcoming artists — all of that is something we bring to the table,” she said.

But if what Burke and Boster are offering is the sensibility of a Vogue editor without the Vogue part, why not go just straight to the magazine itself for that kind of input?

“It’s always good to have some outside perspective from people who have a view of the whole marketplace and not just our company,” said Rosen, who assigned the duo to work on different projects at Theory dealing with e-commerce, styling and its retail stores. “How valuable they are, that’s in the eye of the beholder. I thought they could be a great asset to what we’re doing at Theory.”

Would Wu hire them? What’s the use of a consultant to a designer?

“There’s all these things we do, it’s great to have people around you that you trust their sensibility and that give you an outside perspective. For me, I consistently work with people outside to bring a little more perspective and also to see my work in a different way,” the designer said.

“I don’t know that anyone can help you craft your image,” he said. “This business is pretty straightforward. It’s about having a lot of talent and having a point of view and it’s about meeting the right people and making sure you take just the right advice from those people.”

Burke and Boster are venturing out on their own. They have no backers, and theirs is a team of two with no office space.

“We work out of clients’ offices. We take up residence at Soho House. We work out of our own apartments,” Burke said. Hers wasn’t a bad place to work from, a two-story penthouse with views of Cooper Union and Indochine right across the street. She had just moved in with her eight-year-old daughter, five-month-old dog and fiancé Zach Iscol — she was previously married to John Burke Jr. She’s also expecting her second child. Boster still lives in the Upper East Side. They’re purposely moving forward conservatively.

“We want to make sure we can deliver upon all the services we are promising and don’t take on a lot too quickly,” Boster said. At some point, they want to add an editorial component to their Web site where they can comment on lifestyle in general, be it fashion or celebrity culture. It all seems like a daunting task — the styling, the brand “contextualizing,” the blogging.

Boster, not missing a beat at the suggestion their plans could be too ambitious, retorted, “Vogue has taught us well.”