Kenny Schachter’s life on the edge of chaos. 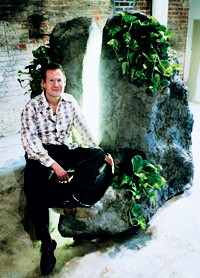 NEW YORK — At the opening of his conTEMPorary Gallery last year — just before some movable shelving fell on the head of artist Laura Emmerick and after electro-punk band A.R.E. Weapons began performing on the second floor — Kenny Schachter stated the obvious: “I thrive on chaos.”

Admittedly, Schachter, an independent curator, self-taught artist and formerly itinerant dealer, takes on too many projects and pushes deadlines too close to the wire.

And if experience is a guide, Schachter is again setting himself up for a stressful time. Beginning this spring, he’s moving conTEMPorary from Charles Lane to a larger space on Hudson and Dominick Streets here, opening a venue for art on London’s Hoxton Square near Jay Jopling’s prestigious contemporary art gallery White Cube, and relocating his family.

“My wife is pressuring me to move to London. She wants to be closer to her father, in Europe,” Schachter said, referring to Ilona Rich, the daughter of New York-based Denise Rich and her ex-husband, pardoned fugitive financier Marc Rich.

Ilona, an artist and fashion designer, has been working on a new collection and hopes to open a boutique in London, Schachter said.

It often seems as if Schachter does his best work under duress. In the Nineties, he staged temporary art shows in vacant garages and storefronts that brought a rougher edge and a less commercial agenda to the increasingly polished New York art scene. Cecily Brown, Janine Antoni and Lisa Ruyter were among the stars to emerge from the high-octane confusion of those exhibitions.

Schachter, who has always railed against the established gallery system, with its sterile white spaces and exclusionary practices, never thought he’d open a gallery of his own. But behind the hyperbole, he’s as business-savvy as gallerists Jeffrey Deitch and Gavin Brown.

Besides, conTEMPorary and the recently opened Rove gallery on Perry Street are anything but simple white boxes. Designed by the notorious Seventies performance artist-turned-architect Vito Acconci, there are no tall reception desks to separate visitors from intimidating gallery employees.

Until Schachter came along, Acconci’s designs were largely theoretical, such as a Disney-esque plan for a park on the C.W. Post campus where a building shaped like a whale morphs into a bird. Acconci, who shares his patron’s disdain for the art world’s affectations, will design the Hoxton Square and Hudson Street spaces as well as a second gallery and bar in London for Schachter.

“I got Vito the commission for a United Bamboo store in Tokyo and a furniture installation in a development Jane Holzer did in Los Angeles,” Schachter said. “I would say I’m his main architectural proponent. Me, and Austria, where they named a pastry after him.”

Although Schachter has become more commercially oriented, he recently published a book, “Jasper Who?” about contemporary art’s relevance to the average person. After 100 man-in-the-street interviews, he concluded that art plays a role in everyday life, but people are alienated by the feigned idea that art can only be understood by the few and afforded by even fewer.

“An integral part of my program is to work outside the confines of the art world,” he said. “I like to cross-pollinate art with architects, fashion designers, dance groups and musicians.”

More recently, “The Club in the Shadows” re-created Danceteria with a performance by Kim Gordon, the female bass player for Sonic Youth. “Art Band: A Night of Music and Art at Capitale,” featured young artists and musicians.

“When I did the show at the Capitale, 1,000 people showed up,” Schachter recalled. “The kids were there in droves.” But Schachter wants to expose art to an ever greater audience. “I need a more public space,” he said. “I hope I’ll finally be able to do that in London.”