YSL handbags, tickets to the Zac Posen fashion show, his-and-hers Ralph Lauren outfits and a wardrobe from Theory were among the many items auctioned off for thousands of dollars at Room to Grow's benefit at Christie's here on Tuesday night. 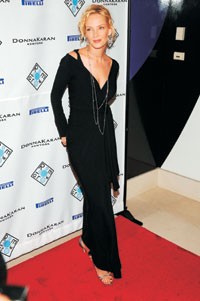 NEW YORK — YSL handbags, tickets to the Zac Posen fashion show, his-and-hers Ralph Lauren outfits and a wardrobe from Theory were among the many items auctioned off for thousands of dollars at Room to Grow’s benefit at Christie’s here on Tuesday night. Josh Lucas was there, and so was André Balazs, who showed up with his daughters Isabel and Alessandra and his girlfriend, Uma Thurman, who was cohosting the event. “Oddly enough,” said Thurman, “I was living next door to Julie Burns, who founded Room to Grow, and when I had my daughter, I was constantly bringing home bags of clothes for her and she was constantly bringing home bags of clothes to be given away. And to imagine trying to be a parent with no job and no resources just really moved me.”

Donna Karan didn’t have the same connection to Burns, but she was still immensely generous: First, she donated a couture dress, which went for $19,000. Then, she bought herself a $39,000 vacation in Tuscany. “What’s more important than children?” she asked.

Earlier that day, a gaggle of Boys’ Club of New York supporters gathered for a light lunch and a showing of the Akris spring collection at Bergdorf Goodman’s BG restaurant — the first event of the year to be held at the favored venue. Though the temperatures outside had suddenly sunk to winter’s normal freeze (much to the consternation of Jamee Gregory, who had chosen to wear a sleeveless khaki dress from the line), the smiles inside were sunny as the likes of Tory Burch, Jennifer Creel, Eleanor Ylvisaker and Serena Boardman mingled following the social season’s holiday break.