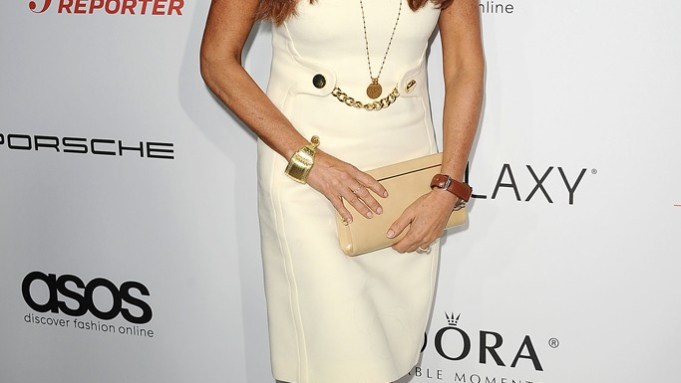 WWD: What makes the Emmys special to you?
R.D.: This one is special because in the past I’ve been nominated a few times as an actress and this time as a producer, and I get to share that with my husband, who has also been nominated in the past. So for us to get to walk this red carpet hand in hand with a project that we have poured our hearts and souls into, “The Bible” miniseries,” to be up for a miniseries is very thrilling, very gratifying, very exciting.

WWD: How are you preparing for the awards?
R.D.: We are bringing our children, our teenage children, are coming with us, and these last few evenings have been a swirl of activity of loads of parties. It’s a bit complicated for us because we live out in the depths of Malibu, so it’s a schlep into town but it’s worth it. It feels validating to be honored in this way with such amazing projects in the category. The show was successful with an enormous rating; 100 million people tuned in and sometimes that doesn’t translate when it comes to awards. The fact that the Academy nominated the show is great fun for us; and an excuse to get dressed up. I got to borrow a beautiful gown it’s amazing I feel like a gazillion dollars in it. Some jewelry will be borrowed from Martin Katz, and my husband is going to look very dapper in a navy blue tux.

WWD: What are you looking forward to most tonight?
R.D.: Tonight, just to seeing some old friends, it’s all good for our industry this week. It’s a chance to salute the best in our business and see friends that we haven’t seen in a while.

WWD: What makes the Emmys special to you?
A.S.: You know I love it when we celebrate great work. We’re celebrating our artists, we’re celebrating the artists, directors and actors who tell the best stories

WWD: How do you prepare?
A.S.: I make sure I get a lot of rest and I’m well hydrated. I have my work cut out for me.

WWD: You have a lot of shows that are nominated. Is it hard to root for just one?
A.S.: I always root for our team. “Modern Family” is nominated, of course. I believe and America believes that it’s the best comedy on television and I think it continues to surprise and delight us. We have some very talented actors. Kerry Washington is nominated, so it’s pretty darn thrilling.

WWD: What are looking forward to tonight?
A.S.: To reconnect with some old friends. This is the time when we are all back from work. We’ve all been scattered doing a myriad of things over the summer, traveling, it’s just a nice time when everyone comes back. Again, it’s just a nice to celebrate a lot of success.

WWD: What show are you looking forward to watching the most this season?
A.S.: Oh, I love all of my children. They all have great surprises in store.

WWD: What are you looking forward to tonight?
J.M.: Well, I’m looking forward to sitting down. My feet are killing me, it’s the first day wearing these shoes. Seeing all the people who are coming, it’s going to be really fun. People are in a good mood. It’s the first day of Emmy Weekend and people are celebrating, they’re relaxed. I think the tension starts to build as the weekend goes on.

WWD: What makes the Emmys so important?
J.M.: TV has never been hotter than it is right now. People are talking about “Breaking Bad,” they’re talking about Kerry Washington, people are obsessed with TV right now. That’s an exciting thing. You see the wattage of events has gone way up. We did a story in The Hollywood Reporter this week that, in terms of fashion, Emmys are the new Oscars. Every top designer wants to dress people for the Emmys when they used to only want to do film stars for the Oscars. The whole as a television industry has been elevated. So have all aspects of the businesses around it.

WWD: Who are you rooting for?
J.M.: I’m not really rooting for anyone but I have to say I’m a huge “Breaking Bad” fan. I watch it religiously I think it would be great if we saw a bunch of awards for “Breaking Bad” this year.

WWD: What makes this award season special for you?
B.Y.: It’s my first year getting to go to everything. So my first prong of attack was I got a stylist so she could be really smart about making me look nice because that stuff worries me. But, otherwise I’m prepared to enjoy everything and wait for Kerry to win. It’s like a dream come true. I’ve been watching TV all my life. Now I get to be a part of the TV family and it’s like TV prom. It’s just the pinnacle.

WWD: How does it feel to know that Kerry has been nominated after working so closely?
B.Y.: It’s everything. We are shamelessly in love; this family of people. Everyone is super nice. Leading the way and setting the tone is Kerry, because she’s so gracious and so thoughtful. She’ll be in Italy and text you to make sure you have shoes for a luncheon. She doesn’t miss a thing. We are all so thrilled for her. We’re all going to get together to watch and so hopefully we can be in the moment together and she can feel our energy. We’re going to be at Jeff’s house. We’re going to have a little party, have drinks, and get all dressed up.

WWD: How does it feel see Kerry nominated?
D.S.: She is so deserving of this nomination. I have a really good feeling that she might win. I’m crossing my fingers. She’s just so talented on so many levels and along with that has so much grace and character she just deserves this Emmy nomination on so many levels.

WWD: Looking forward to most tonight?
D.S.: Just to have a good time with my “Scandal” pals, half of the cast was able to show up. It’s always nice to hang out off set.

WWD: How does it feel to be nominated?
J.B.: It feels fantastic. I love being on the show “The Big C.” It was a great experience. To be nominated after the show is over. We finished our last season; it already aired. So to get the news that I was nominated was like cherry on top of a really delicious cupcake.

WWD: How did you celebrate?
J.B.: I partied I drank copious amounts of tequila. No, I didn’t even know the nominations were coming out. I had a few beers with some friends at a bar; nothing too major. I’ll save that for Sunday night.

WWD: Who are you rooting for?
J.B.: I love Laura Linney, I’d love to see her win. I loved “Parade’s End.” I loved the miniseries on HBO. I love “Parks and Recreation,” I love “The Good Wife.” There’s so much great TV on right now it’s really hard to pick. I mean that, I’m not just being diplomatic.

WWD: Why are the Emmys important?
J.B.: I think any chance for actors to be celebrated for how hard they work. That’s a great cause for celebration.

WWD: Why are the Emmys important fashionwise?
G.K.: I think we can have a superfashionable Emmys because we have all these fashionable girls that are going. Kerry Washington, Claire Danes and Lena Dunham. They get the higher level of designers. Normally, that isn’t true unfortunately of TV girls. It’s really reserved for the movie stars. The bar will raised a lot higher. Normally it’s the Golden Globes, but I think the Emmys are going to be a hot fashion ticket.

WWD: Who are you rooting for?
G.K.: Kerry Washington! She’s a great girl.