By Ericka Franklin on May 7, 2014
View Slideshow 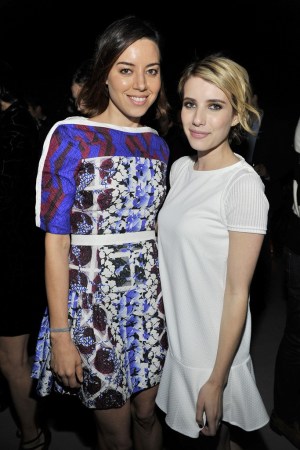 After screenings in New York and San Francisco, Gia Coppola’s new film, “Palo Alto,” made its way to Los Angeles with a premiere, sponsored by Farfetch, at the Directors Guild of America Monday night. Named after James Franco’s collection of short stories, the film draws viewers into a dark teenage world fueled by misguided love and self-discovery.

Although her family name clearly gives her cred, the script wasn’t exactly handed to Coppola on a silver platter. “I had her do what I do with a lot of my film students,” said Franco, who also stars in the film, of Coppola’s directorial debut. “I had her shoot a 45-minute test and once she showed me that, I just knew she had it. She did things that I never would have done. Like the way that she tied them all together, she gave it an overall unified arc.”

Although there is heaviness to the movie, shooting, apparently, was quite light. “It was like one big summer camp,” said Emma Roberts. “It was like one of those casts that happens a couple times in your lifetime. It was really just lightning in a bottle with everybody and it just worked out perfectly.” Castmate Zoe Levin echoed the sentiment: “We all reminisce about the one party scene in the movie because we were like, ‘This is the best party we’ve ever been to.’”

Before the lights dimmed, Coppola joined Franco onstage to tell the crowd in her delicate voice, “It’s superexciting to be here in L.A. where I was as a teenager. My friends and family [are] here. I want to thank James for believing in me.”

Shortly after the end credits, there was a swift procession to the Chateau Marmont down the street where revelers — Rachel Zoe, Rodger Berman, Demi Moore, Rumer Willis, Rose McGowan, Nathalie Love, Elijah Wood and Johnny Knoxville — shimmied to tunes from DJ Myles Hendrik on the balcony of the hotel’s sixth-floor penthouse.