Goin’ to the Chapel: Historian Jenny Uglow Discusses Her Craft

She likes to find a relatively unknown — and fascinating — part of history, research it thoroughly, and turn it into a book. 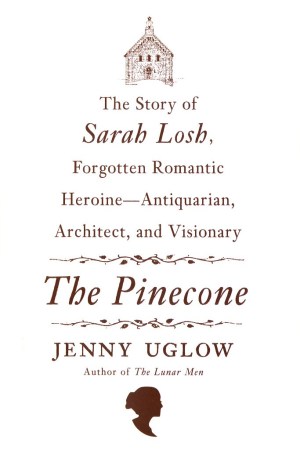 The appeal to her of the people she writes about, historian Jenny Uglow says, is “when something that they should do occurs to them, they think, ‘Why not?’”

And, indeed, Uglow’s books always have an original angle. She likes to find a relatively unknown — and fascinating — part of history, research it thoroughly, and turn it into a book. Most of her reviewers have commented favorably on these choices. Her latest is “The Pinecone: The Story of Sarah Losh, Forgotten Romantic Heroine — Antiquarian, Architect and Visionary” (Farrar, Straus & Giroux). Uglow grew up in the part of Cumbria, England, that’s the site of the unusual church Losh designed and built between 1840 and 1842. “She amused me,” says Uglow of her subject. “I like strong people who forged her own way. She might be a bit scary to meet — intense and forceful, but obviously, she was reserved, too.”

Losh was a member of the local gentry, a family who made a substantial fortune through investment and innovation. Neither she nor her sister, Katharine, ever married — clearly by choice, since both were attractive, personable and, of course, heiresses. Uglow questions whether Losh would have been able to find a suitable mate among the men who were available; most, she says, would have “bored her rigid.” Sarah and her sister were very close; the former was devastated when her sister died young, and, in the end, the two were buried together.

When Losh decided to create her church, she led the town elders to believe that she was just planning to restore an existing one. The historian Rosemary Hill notes, “When they say, ‘It’s in a dilapidated state’ — watch out.” Then Losh tore the church down and created an entirely new one, marked by a Romanesque inspiration and a remarkable variety of carvings, including a font in the shape of a stork, and many other animal carvings, along with plenty of the organic inspiration for the church’s name, pine cones. She even did some of the carving herself. “She got up on the ladder with her great skirts,” Uglow says.

Most people who see the church for the first time assume it is an Arts & Crafts movement building, but in fact it’s unique, created 50 years before the Arts & Crafts era. In doing her research, Uglow found two or three families, who had lived in the town for generations, and she saw their daybooks from the time. “People are very passionate about their area,” she says. “I really felt like part of a community, as if I were writing their book for them.”

Uglow has written 11 other books, including “The Lunar Men: Five Friends Whose Curiosity Changed the World,” “A Gambling Man: Charles II’s Restoration Game” and “Nature’s Engraver: A Life of Thomas Bewick.” She describes herself as “semiretired”; she works as an editor at Chatto & Windus, where she oversees the work of only five writers. She has a new book in the works about life in Britain during the Napoleonic Wars. “It’s a crowd biography,” she explains. “It’s kind of a home-front book — who did well, who lost out.”