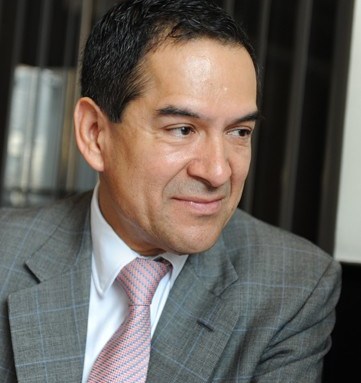 If there were a Nobel Prize for dining room diplomacy, then Jesus Adorno, the longtime manager of London’s Le Caprice restaurant, would easily be the winner. For nearly three decades, the smooth, 56-year-old Bolivian has been catering to high-profile, often finicky diners — including the Duchess of Cornwall, Maurice Saatchi, Julian Fellowes and the late Princess Diana. Now he’s ready to work his magic in Manhattan.

Starting with a party tonight for Vogue’s “The World in Vogue” book, Adorno will launch the restaurant’s first foreign outpost at Manhattan’s The Pierre hotel. It opens to the regular dining public next week. They said they are aiming for Mon, Oct 26, and will begin accepting reservations in the second week of November.

Adorno, a director of the privately held, London-based Caprice Holdings Ltd., has been crisscrossing the Atlantic for the past few months in preparation. He says he hopes to re-create the British original’s sophisticated but simple dining experience, complete with a piano player and a jolly, liveried man posted outside the revolving door.

“I think of Le Caprice as a good pair of old slippers,” he explains in his singsong Spanish accent.

Here, Adorno speaks about the restaurant’s menu and how he handles both customers and food critics.

WWD: Why are you taking Le Caprice to New York?

Jesus Adorno: It’s an easy restaurant to transport, and a lot of our regular customers in London are New Yorkers. And it’s been my dream for a very long time; I see it as a wonderful challenge. I want to start humbly and gently in New York, and make Le Caprice a success there.

WWD: Have you made any changes to the menu for your American customers?

J.A.: Most of the menu is the same. It’s well-executed comfort food like Thai-baked sea bass, steak tartare, crispy duck, dressed Dorset crab with celeriac rémoulade, fish cakes with sorrel sauce and eggs Benedict. There are definitely more salads, though. I want to adjust to what Americans want.

WWD: What’s your biggest pet peeve in the dining room?

J.A.: I hate saying “no” to a customer who calls to book a table. If I have to do it, I say it with passion, so they understand I’ve done my best. And I always look at every angle of the room to see if I can squeeze someone in. If I happen to find a place, I consider it a battle won.

WWD: Many years ago, one London critic referred to you as a “glorified waiter.” What did you think of that?

J.A.: I don’t give a damn what they call me! If the critic had said Le Caprice had gone downhill, that would have really hurt. For me, it’s all about the restaurant, customers and staff. And I still think of myself as a waiter. I still serve food, clear tables and open bottles of wine. If I see the staff sweat, then I sweat as well.