From gallery booths to glam parties, the focus at London’s Frieze Art fair, which wrapped up Sunday at Regent’s Park, was on serious collecting. 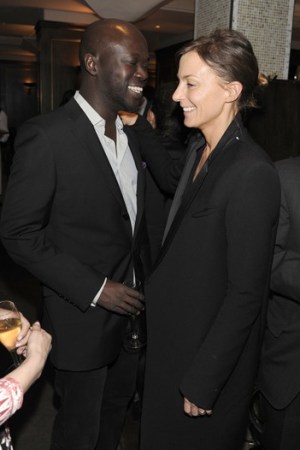 From gallery booths to glam parties, the focus at London’s Frieze Art fair, which wrapped up Sunday at Regent’s Park, was on serious collecting. A Louise Bourgeois sculpture, “The Couple,” went for $3.5 million; Neo Rauch’s “Harmios” sold for $1 million, and John Baldessari’s “Beethoven’s Trumpet (with Ear) Opus 133” sold for $400,000.

“We closed a lot of deals — and I’m very happy about that,” said Thaddaeus Ropac, who represents artists including Andy Warhol, Georg Baselitz and Alex Katz. “Compared with past years, collectors are being really thoughtful and measured about what they are buying. They’re not making snap decisions.”

Elke Seebauer of Victoria Miro in London, which represents Conrad Shawcross, Grayson Perry and Chantal Joffe, said the market has recovered from last year’s credit-crunch shock. “There’s a lot more confidence out there.”

“I like to play the ‘What would I buy with one million pounds?’ game when I walk round,” said Emily Oppenheimer. “Grayson Perry’s tapestry is on my list.”

A few streets away, Frieze was the topic of discussion during a dinner at Claridge’s celebrating Dennis Basso’s new boutique at Harrods. Hosts Rena Sindi, Tamara Beckwith and Serena Boardman mingled with Princess Marie-Chantal and Prince Pavlos of Greece, Tamara Mellon, Becca Cason Thrash, Jamie Tisch, Margo Stilley and Lillian von Stauffenberg. Cason Thrash, for one, was happy about the fair’s seeming influx of new blood.

“There were pieces for real collectors. It wasn’t full of hedge funders running around saying, ‘I want that and I want that,’” she said.