"We all sit around talking about things we want to change, but unless you change, it ain't going to happen," says Alicia Silverstone. "I used to say, 'What... 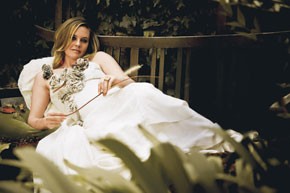 SANTA MONICA, Calif. — “We all sit around talking about things we want to change, but unless you change, it ain’t going to happen,” says Alicia Silverstone. “I used to say, ‘What can I do? I’m just one person.’ It’s a lovely excuse but it’s a bunch of BS. Once I made the change I saw how powerful one person is.”

This story first appeared in the October 30, 2007 issue of WWD. Subscribe Today.

For Silverstone, 31, being green comes easy. The actress and animal activist said her eco-consciousness was a by-product of becoming a vegan nine years ago. “Up until that point, I was pretty much eating steak and doughnuts every day,” says Silverstone, who lives in Laurel Canyon with her musician husband Christopher Jarecki and their four dogs. Once her acting career took off, animal-rights organizations found her, and she learned what was happening to animals raised for food. “In every fiber of my body I felt, ‘This has to stop,'” she says of the day she decided to become vegan. “The awesome thing about being a vegetarian is that you are taking care of the environment, the animals and your health at the same time.”

While Silverstone notes that she doesn’t preach her beliefs to others, she says her intention is to empower people to understand that they matter. “We all breathe the same air, and we all need water and food,” she says.

Silverstone, who calls herself a “food snob,” said she never expected to find so many delicious vegetarian dishes, but her list of favorite Los Angeles restaurants would make anyone’s mouth water: Inaka, M Café de Chaya and Madeleine Bistro all specialize in vegan or macrobiotic fare, and she also loves vegetarian offerings at restaurants Angelini Osteria and Nishimura. One of her most frequent haunts is Real Food Daily. “They have the best nachos and Reubens and cupcakes, and their Sunday brunch is amazing. They make omelets and French toast and pancakes and a vegan benedict.”

For her birthday earlier this month, she had a vegan feast at Roy’s downtown with “the most wonderful mushroom dishes. Anyone should go there and ask for what Alicia had for her birthday.”

Aside from sustenance, Silverstone also takes pleasure in shopping. While she says her first choice is always vintage — she doesn’t wear new wool or any type of fur or leather — she finds that there are plenty of novel resources for natural fibers. “I think it’s important that the fashion industry catch up to what consumers want,” she explains. “There are a lot of really groovy artistic people out there looking for fashionable things.”

Among her favorites are Save, Loomstate and Stella McCartney. She buys socks and underwear from Gaiam and carries canvas bags by Anya Hindmarch and Alternative Outfitters. “I’m not perfect at all, I just try really hard,” she says. “Just do the most you can. It’s not all or nothing.”

Her beauty picks are also numerous. She loves Jurlique products and daily skin care from Suki. For her hair, it’s Kiss My Face, Giovanni and Desert Essence; blush by Dr. Hauschka; mascara from Gabrielle and Aveda, and concealer by Zuzu and Eco-Bella. “I buy most of my products at Whole Foods,” she says.

At home, old scripts make perfect paper for her printer and fax machine, while she reuses glass bottles, opts for cloth over paper towels and napkins and filters her water to avoid buying plastic bottles. “Every time you buy something, just think, ‘Where does this go?'” she says. “It’s not difficult.”

“I feel like I’ve run myself down my whole life until just recently. I’ve been working since I was 14, so my reality was warped. So now I’m just stepping back and listening to my heart.”
— Marcy Medina

Hidden on a quiet street in Santa Monica, Calif., The Ambrose Hotel is a gem of a green retreat — and the perfect locale for WWD’s Green issue fashion shoot. Its craftsman-inspired architecture and Zen-like interiors make the hotel serene yet cozy, but the real draw is that The Ambrose, built in 2003, is a certified “green” hotel, the only one of its kind in Los Angeles.

Hotelier Deirdre Wallace started the getaway from the ground up as a holistic retreat. “Our intention was to build a healthful hotel. This was my first project and there were many green choices, but it was during the process of building the hotel that I learned what green building really was,” says Wallace. “Soon after opening, we ‘greened’ all of our operational practices.”

With assistance from the city of Santa Monica, environmental experts and feng shui consultants, The Ambrose is set to be LEED-certified next year. LEED (Leadership in Energy and Environmental Design) is a rating system developed by the U.S. Green Building Council.

Zero-VOC (volatile organic compounds) wall paints and floor lacquers were used throughout the hotel, but it’s the smaller, everyday things that appear to be making the biggest impact on customers. About 75 percent of the hotel’s waste is composted, while nontoxic housekeeping products, recycling bins placed in each room, a towel reuse program and preferred hybrid parking insure low-impact living from guests and staff alike. Being green and sustainable, though, does not mean skimping on luxury. The rooms feature hardwood floors, Frette robes and all-natural Aveda products.

As for the real showstopper (not to mention the setting for this shoot), the Japanese courtyard garden provides a peaceful place for guests to indulge in the fresh organic berries and fair trade coffee served every morning.
— Monica Schweiger