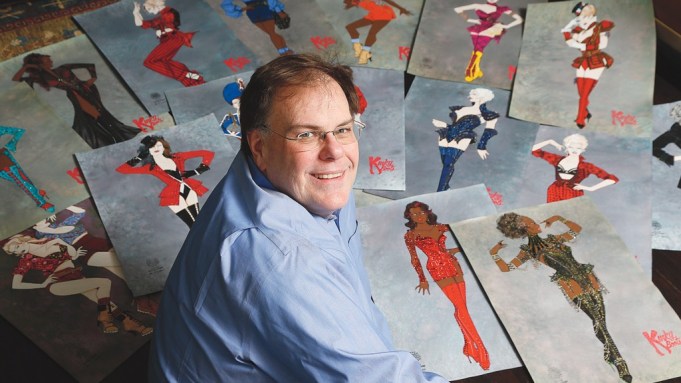 “Kinky Boots” opens tonight on Broadway after a lengthy publicity blitz mostly centered around Cyndi Lauper, who wrote the music and lyrics, while Harvey Fierstein did the book. Based on the 2005 film, which in turn is based on true events, “Kinky Boots” is the story of a struggling English shoe factory that puts itself back in the black by ditching classic brogues for high-heel boots made for drag queens.

When speaking to WWD, Lauper stuck to the subject of the show’s music, which is more about the “human condition,” she said. For the song “Sex Is in the Heel,” though, Lauper drew on her fashion experience. “It’s about wearing heels that lift you, not looking like a flat tire,” she said. “And the fact that stilettos are an ‘ism,’ I learned that a long time ago.”

RELATED STORY: Fall 2013 Accessories Trend, Get Your Kink On >>

The man behind the actual kinky boots is Gregg Barnes. The Tony Award-winning costume designer sourced every pair for the play and has experience designing for extreme showmanship — his credits include “Follies” and “Legally Blonde.” Here, Barnes discusses the challenges of seven-inch stilettos.

WWD: Tell me about the boots.
Gregg Barnes: Jerry Mitchell [director of “Kinky Boots”] had a certified vision that the runway honor things British, which was logical because the play was set in England. So we had iconic British things like the flag, beefeater, English riding. The factory initially made brogues. We have the one set of boots that is turquoise with orange spots, and we turned it into a drag boot. Then I looked into the shoe world to see what everybody was up to — Fendi, Westwood, Prada, Louboutin, everybody. I tried to make our own vocabulary. It was a huge amount of development, which paralleled the story — they have to hold up a man, and not just walking on the runway. They have to dance.

WWD: Who produced the boots?
G.B.: They’re made by two companies, T.O. Dey and Phil LaDuca. Every Broadway musical has those two guys make custom shoes. Part of the challenge is that very often the heel on the Broadway dance shoe has a bigger base. The floor on the stage has tracks, and if you have a stiletto heel, you could get pinned on stage. The very first thing Jerry said was, “We can’t have all of these tracks on the floor.” We have a lot of dance numbers, we know we don’t want to have traditional big base heels. They have to be in stiletto heels, which is part of the story. We asked the set designer to not have a bunch of grooves in the stage, and that opened it up for us to experiment with all different stiletto heels. Then we found that the men couldn’t balance on the true stiletto heel we made. So we did a lot of tricks with the platforms. I had this shoe made where the heel cup extends to look like a seven-inch heel.

WWD: You weren’t tempted to find a doomed traditional English shoe factory to salvage?
G.B.: I needed you to call me and give me that suggestion months ago. It’s funny — it’s based on a true story. A lot of the shoes that are used as props on the stage came from companies [like the original factory in the story]. They look crazy and sassy but they’re very, very cheap. We were afraid to use those so nobody would get hurt.

WWD: How many boots are in the play?
G.B.: I don’t know. There are 22 pairs of boots just for the finale.

WWD: Did the cast have experience with seven-inch heels?
G.B.: Many people in this show, including women, if you asked, “When you dress up, how high a heel do you wear?” they said, “I never wear a heel.” Here, we have a play that’s about putting on a stiletto boot. We have men up there that obviously have never had a pair of high heels on, and some of them are wearing the highest heels in the show. They really rose to the challenge. There is a lot of physical therapy that goes along with wearing those dance boots.

WWD: Did you try them out?
G.B.: I tried on a pair. It was so uncomfortable. I was ashamed. I thought about all of the years I’ve been putting poor women in four-inch heels and just thinking, “Oh, this is easy. Anybody can do this.” It was a good lesson for me.