The actor talks about his next projects: a third installment of "The Hangover" and “CBGB,” a film about the legendary punk rock club on the Bowery in New York. 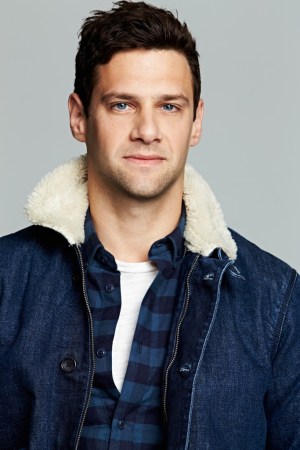 The actor, who rose to fame as Doug in “The Hangover” trilogy and as a gay man on ABC’s “New Normal,” doesn’t find a lot of the minutia of daily life interesting. Exercise? Not interesting. Golf? Hates it. Social media? Has a personal aversion to it. And most of all, he finds interviews with actors tedious, including himself.

“Profiles about actors are so boring,” he said. “And I’m a boring subject.”

The 34-year-old, who was born in Fort Lauderdale, Fla., and grew up in Michigan the son of a teacher and a real estate developer, decided at a young age to pursue a career in the entertainment industry. He attended the film school at New York University and began his career behind the camera as a production assistant on the movie “Analyze This.” “I remember driving through New York in a taxi cab and going by the Village Voice offices on Astor Place. There were long lines of actors waiting just to audition for something they’d read about in Backstage,” he said. “I knew I didn’t want to be just another person in that line.”

But it wasn’t long after getting his feet wet behind the camera that he made his debut as an actor, performing in short films and appearing in projects he wrote and produced himself. His breakthrough came in 2004 when he costarred as Riley Poole in “National Treasure.” A number of film roles followed, including “Failure to Launch” and “The Rebound.” In 2009, he snagged a supporting role in “The Hangover.” The third installment in that project is set to be released on May 24.

“I don’t think anyone expected this kind of success,” he said of the franchise. “If a movie’s good, you just hope it turns out well and then can make some money.” If he’d known the movie would be so popular, “I would have pushed for more character development in the first one,” he said with a laugh. His character, who he said is “the grounded one and too responsible for fun,” is kidnapped in the most recent tale, so Bartha’s role is fairly small. Even so, he relished the opportunity to work again with Bradley Cooper, Ed Helms, Zach Galifianakis and the other actors, as well as with director Todd Phillips.

“Everybody is really close,” he said. “I’d known Todd for years, done a few movies with Bradley and was a fan of the other guys.” He said the set was filled with laughter as the actors tried to one-up each other. “It was really more comedy than drama,” he said, adding that he will “miss spending time with such a talented, fun, creative group of people. From the crew to the cinematologists to the craft services people, everybody was at the top of their game. It sounds cheesy, but you really can’t get much better than that.”

In addition to “The Hangover,” Bartha created a buzz by playing David, a gay expectant father, on the “New Normal,” a comedy created by Ryan Murphy of “Glee” fame. He also became a role model for the gay community when David and his partner Bryan, played by Andrew Rannells, got married at the end of the season. (Bartha is waiting to see if the series will be returning for another year.)

“That was really exciting for me,” said Bartha, who is heterosexual and has been romantically linked with Ashley Olsen and Scarlett Johansson over the years. “I really wanted to work with Ryan and asked to read the script. I thought it was beautiful and funny and well-written — and a very relevant and cool project to be on.” The relationship between the two men on the show was “not watered down or glossed over,” he said. “And I thought that if it works, it would be something I could be proud of.”

Making a difference is something Bartha doesn’t find boring. “I try to find things I can have some passion about,” he said. “I know I’m really lucky to be able to do what I love, but I also look for things with some cultural relevance to them.”

That describes his next project, “CBGB,” a film about the legendary punk rock club on the Bowery in New York. Bartha plays Stiv Bators, lead singer of the Dead Boys, which was the house band for the club, and performs five songs in the film. “It was great. I think everybody wants to be a rock star,” he said, pulling up a photo on himself in character on his iPhone.

Beyond that, Bartha is just playing it by ear.

“It’s tough to have a plan in this business,” he said. “That’s an easy setup for disappointment. So I just hope to get involved with projects I can be proud of and that let me sleep at night. I’ve done work that has been just for the money, and you feel really sh—y about that. My wish is to be involved in this business as little as possible and find a way to do something substantial. I have enough money to live now, so I’d rather run a bar in Cozumel than work on another sh—y movie.”