"How long has Coach been around?" queried Diane von Furstenberg Tuesday night when she hosted a dinner for the brand's president and executive creative director Reed Krakoff. 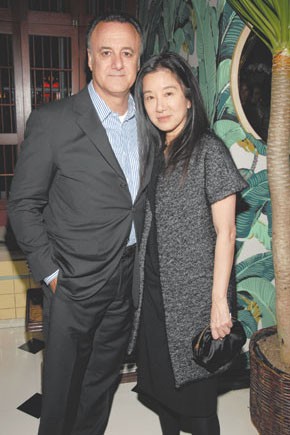 “How long has Coach been around?” queried Diane von Furstenberg Tuesday night when she hosted a dinner for the brand’s president and executive creative director Reed Krakoff. “One hundred years, hundreds of years?” Sixty-six as it turns out, only 10 of which have had Krakoff at the design helm. But to that the Council of Fashion Designers of America’s president paid no mind. “For me, there was no Coach before Reed,” she said with affection.

For the man of the hour, there was a tinge of “this is your life” to the evening, as he greeted guests like Kiki Smith (with whom he collaborated on a limited edition bag) and Rogan Gregory (with whom he worked back in his days at Tommy Hilfiger). But by far, Krakoff said, the best thing that’s befallen him since 1997 is his wife, Delphine, whom he met when she was in merchandising at Coach.

“I really consider [my job] not to be work,” Krakoff said with pride. “What I’ve learned slowly is to enjoy the process.”

The previous night, New York Public Library’s Literary Lions gala proved city fund-raisers can make for some strange bedfellows. PYTs Amanda Hearst and Lauren Bush came out to mingle with the likes of Robert and Luciana Duvall, Barry Diller and Mayor Michael Bloomberg, as they honored Martin Scorsese and Tom Stoppard. Not surprisingly, Scorsese didn’t mingle long during the cocktail hour — instead posing briefly for pictures and taking his seat for dinner upstairs.

Those who did stick around discussed “literature,” or their versions of it. “I read all the time,” said Jimmy Fallon. “I read Us Weekly. Does Sudoku count?”

Said Bloomberg: “I love nonfiction books and I read eight newspapers a day.” Or his media relations office does.