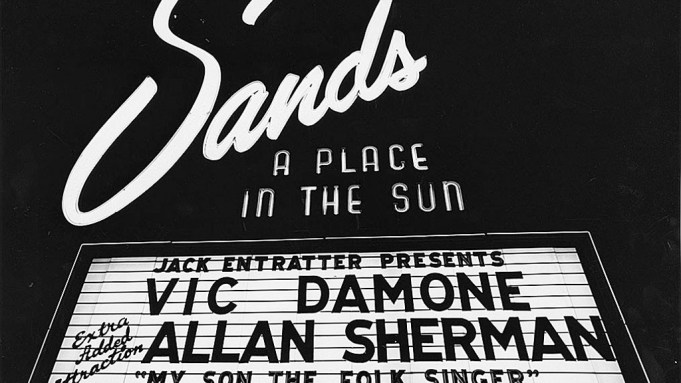 Many remember his Grammy Award-winning 1963 song, “Hello, Muddah, Hello, Fadduh! (A Letter From Camp),” which features the lines, “And the head coach wants no sissies/So he reads to us from something called ‘Ulysses.’”

Allan Sherman created many other indelible comic ditties. His first three albums, “My Son, the Folksinger,” “My Son, the Celebrity” and “My Son, the Nut,” sold a total of 3 million copies. The third album became a number-one hit on the Billboard charts, and, at one point in August 1963, all three albums were in the top 100 of the chart at the same time.

Now the subject of Mark Cohen’s new book, “Overweight Sensation: The Life and Comedy of Allan Sherman” (Brandeis University Press), Sherman managed to parlay a considerable gift for wordplay into a career as a creator and singer of song parodies with an explicitly Jewish sensibility that were immediately and overwhelmingly successful. For a few years, he was at the top of the comic world. But it didn’t last. His personal demons, which led him to excesses in all kinds of consumption — food, alcohol, spending and sex — destroyed his health. He died of what Cohen calls “self-inflicted health wounds” at the early age of 48 in 1973. By then, he had turned up in Newsweek’s “Where Are They Now?” column.

This is the first biography of Sherman, and Cohen had access to the comic writer’s estate. Sherman’s early life was notably disjointed; his mother, who married multiple times, had a habit, at intervals, of sending him from Los Angeles, where she had moved, to Chicago to live with her parents, Leon and Esther Sherman, who fortunately adored him. It was their warm, lower-middle-class Jewish world that he wanted to celebrate, and he did so with consummate skill.

Already brilliant, charming, funny, overweight and self-hating, when he suddenly became successful, Sherman found it difficult to deal with. He married a woman he met at the University of Illinois, Dee Chackes, and they had two children, Robert and Nancy, but, Cohen writes, as his friend Billy Goldenberg said, “‘They were not part of his life.’ Sherman loved his wife and ‘he adored his children,’ but he needed distance from them. Goldenberg said, ‘He wouldn’t have them around.’”

Cohen admits, “I was a childhood fan of him, like a lot of people,”adding, “When he appeared on the scene in 1962, I thought it was pretty early for really out-there Jewish humor, and when I learned more about his personal life, I thought that the story was a fascinating one.”

Cohen, who will speak about the book on May 29 at the Museum of Jewish Heritage in New York, has written an interesting and engaging biography of a complicated man. And, wisely, he quotes liberally from Sherman’s lyrics. Who, for example, can forget his version of “The Battle Hymn of the Republic,” which becomes “The Ballad of Harry Lewis,” celebrating a cutter in the garment district who dies in a fire and “was trampling through the warehouse/Where the drapes of Roth were stored.” Or “Sarah Jackman,” sung to the tune of “Frère Jacques,” which includes the lines, “Sarah Jackman, Sarah Jackman/How’s by you? How’s by you?/ How’s your brother Bernie?/He’s a big attorney/…How’s your cousin Ida?/Still a Freedom Rider…/Toodle-oo. (Toodle-oo).” And then there’s “If I Were a Tishman,” sung to the tune of “If I Were a Rich Man.”