The former Secretary of State — and narrator of the exposé about Africa’s ivory poaching trade —?attended Tuesday night’s screening at MoMA in New York. 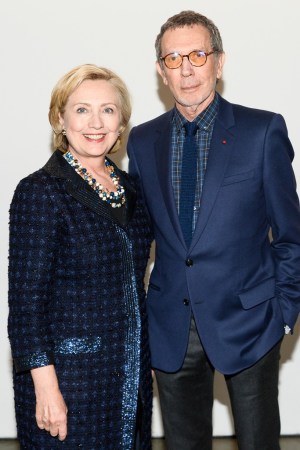 Hillary Rodham Clinton, ubiquitous on the gala circuit lately, skipped the red carpet at Tuesday night’s screening of “White Gold” at the New York’s Museum of Modern Art, but she made her presence known in other ways.

As narrator of the exposé about Africa’s ivory poaching trade, the former Secretary of State told the crowd that, on average, 96 African forest elephants are killed each day for their tusks. “Unfortunately, still too many consumers, especially in Asia, need to understand the hidden costs of ivory,” she said. “It’s a strategic and security issue that affects people in Africa and around the world.”

After the post-screening panel, Clinton and her daughter Chelsea, who once went to Kenya on assignment during her brief run at NBC News, were in no great rush to leave, chatting with guests. But the former first lady made it clear that her save-the-elephants efforts do not extend to Republicans.

When Peggy Siegal, who organized the screening, mentioned she had also worked on another wildlife film, “Battle for the Elephants,” that was financed by conservative billionaire David Koch for $1 million — “a drop in the bucket for him” — Clinton called out, “Redemption, redemption — if possible, if possible.”

Later, Siegal said to Cynthia Rowley, “I can’t believe you let me discuss David Koch with [Clinton]. You should have kicked me.”

The film’s producers, Simon Trevor and Arne Glimcher, needed no reminding of the urgency of the poaching issue, nor did Christie Brinkley and Sigourney Weaver, whose famous conservationist film “Gorillas in the Mist” was produced by Glimcher. Also in attendance were Chris Benz, Chuck Close, Tara Subkoff, Stacey Bendet, Kyleigh Kuhn, Zoe Buckman, David Schwimmer and Iman.

Brinkley was fired up about the issue after a recent safari trip in Africa with her 15-year-old daughter, Sailor Brinkley-Cook.

“We should have a big ivory burning event,” Brinkley suggested to Weaver. “I think it should become a thing. It has no beauty to it. It’s a symbol of murder, of corruption, of suffering. I want to contact eBay and have them say they won’t sell. I want to get the whole fashion industry to come together to say, ‘We reject ivory as any statement.’”

“That’s the thing — to not make it chic any more,” said Weaver. “I was given many years ago some beautiful pieces that I just never wear. But I haven’t burned them. I guess I wasn’t aware that you could burn them.”