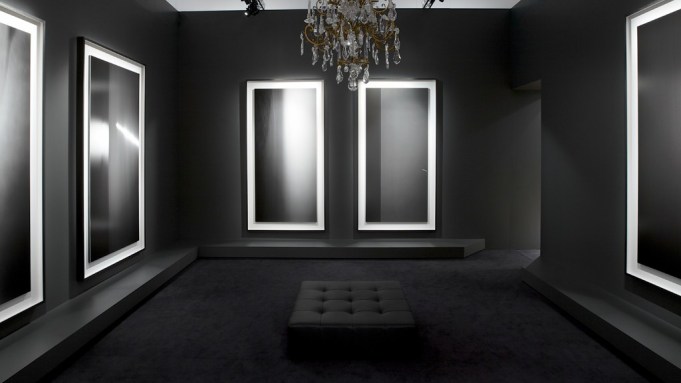 On a recent day in Paris, the Japanese artist Hiroshi Sugimoto was at the Boucheron boutique on Place Vendôme considering the plethora of exhibitions and performances he is staging in the French capital as part of its Autumn Festival.

“I decided this is a particular year for me: I called it the Paris Invasion Program,” Sugimoto says, maybe only half joking.

To wit: Boucheron has transformed its luminous flagship into a black-walled art gallery to showcase a series of imposing black-and-white prints of nighttime seascapes from Sugimoto’s “Revolution” series, which are being exhibited until Friday alongside its latest high-jewelry collection, Hôtel de la Lumière. Across town, the “Accelerated Buddha” exhibition at the Fondation Pierre Bergé-Yves Saint Laurent, which runs until Jan. 26, displays a selection of the artist’s vast collection of antique statues and objects alongside a video installation. Meanwhile, the Théâtre de la Ville put on Sugimoto’s production of the Japanese bunraku puppet theater play “Sonezaki Shinju” (“The Love Suicides at Sonezaki”) from Oct. 10 to Oct. 19, following performances in Madrid and Rome. To cap it all, a set of 27 Sugimoto prints is one of the star lots at a contemporary photography auction due to be held at Christie’s Paris on Nov. 16.

The works on show in Paris reveal a more romantic and spiritual facet of the 65-year-old contemporary art star, known for his rigorous and conceptual approach to black-and-white photography. The “Revolution” series is based on images he shot in remote locations ranging from Newfoundland to Egypt. But the artist has flipped the pictures from horizontal to vertical and spliced off a portion of the negative to create an elongated format.

“Once it’s turned vertically from the horizontal position, I felt all of a sudden like I was off the ground, and I felt like an astronaut looking at the Earth from the point of view of somewhere in space. So this is a new discovery, to see seascapes from outer space,” Sugimoto explains as he provides a tour of the exhibition.

Sugimoto reveals that the moody images, which were made using exposure times of up to three hours, were inspired by 19th century German Romantic painter Caspar David Friedrich — a fact he wasn’t comfortable acknowledging when he shot them in the Eighties and Nineties.

“When I was young and starting to promote myself, it would have had a negative effect to show my German Romantic side. I wanted to be seen more as a conceptual artist or a minimal artist, so I intentionally hid my Romantic side. But now I’m kind of established, so I can confess,” he says.

The “Accelerated Buddha” video, meanwhile, is a dizzying experience in which 48 photographs of Buddha statues taken in a temple in Kyoto are projected on three screens at increasing speed, until they submerge the viewer in a sensory blur. Sugimoto says he was trying to imagine what believers in Pure Land Buddhism might experience in their dying moments, explaining that, according to tradition, their fingers are tied by strings to a painting or image of Amida Buddha to guarantee rebirth in the Pure Land, or paradise.

“Nobody has ever seen a dying scene in moving images, I think. This is the world premiere of how we feel when we die, believe it or not. If it’s wrong, I’ll give you your money back — but you’ll already be dead,” he says.

If Sugimoto tends to deflect serious questions with ironic humor, his fascination with the concept of Pure Land stems from a fairly bleak perception of humanity. Death, he muses, might come as a relief, as it does to the star-crossed lovers in “Sonezaki Shinju,” who dream of an afterlife where they can be together.

“It can be peaceful. Maybe you just wake up from the actual world to get into another world that might feel not like dying, but like waking up to find out, well, I was dead, now I’m alive to this stage,” he says, adding that he believes the planet is spinning out of control.

“We are in this late capitalism stage where we have to seek five, six percent growth every year, otherwise the world collapses, so it’s like riding a bicycle — when you stop, you fall. So this is the system. Naturally, we cannot grow forever, so I have a strong feeling that this will be ending soon. Soon means 50 years, 100 years, 10 years — you never know. But one thing’s for sure: We can’t keep expanding forever.”

It might seem like a paradox, then, that he has contributed to the galloping inflation of art world prices, with his work selling for up to $1.9 million at auction — but Sugimoto shrugs off his market valuation.

“The auction record is nothing to do with me. I never got rewarded from this million-dollar prize. It sold for maybe less than one-tenth of the price a few years earlier. But I appreciate that people pay that much money for my art and I definitely made a few people happy — happier than me, maybe,” he says.

In the spirit of giving back, the artist uses a portion of the revenues from the sale of his works to finance theater productions through his Odawara Art Foundation. It also receives the support of companies including Hermès, Costume National, Shiseido and Boucheron, who all underwrote the “Sonezaki Shinju” production.

Last year, Sugimoto created limited-edition silk scarves for Hermès, and he recently designed a café inside the Oak Omotesando complex in Tokyo, which houses Emporio Armani and Coach stores. But he is wary of being associated too closely with the fashion world.

“I don’t want to be hired by one particular company, like Murakami, so I want to be equally friendly to major houses so that I can be neutral,” he says, referring to his fellow countryman Takashi Murakami’s collaboration with Louis Vuitton.

Sugimoto’s growing activities in fields such as architecture and the performing arts reflects some disenchantment with photography as a means of self-expression.

“I’ve been doing these photography shows, and once the prints are made and hung, they stay for a long time. In the theater, every night it’s the same performance, yet every night is different,” he says. “That feels superior to being fixed to a material.”

He says much of the power of bunraku, for example, stems from the concept of “ma,” according to which beauty lies in imperfection.

“The puppeteer and the string players and the singers, they don’t look at each other at all. The three different mediums, they try to play individually in a uniform way, but not perfectly uniform — they are all slightly a touch off each other. That makes the night’s performance, whether it’s great or so-so,” he explains.