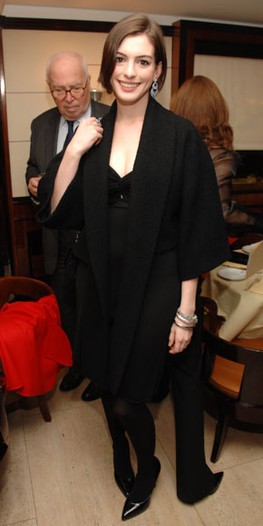 “For 45 years, everyone thinks I love parties and to go out. It’s all wrong. I love to stay home.” And there it is, straight from the horse’s mouth: Valentino is a homebody.

Of course lately, all evidence has been to the contrary, what with the endless round of parties honoring the designer’s lengthy career. Friday night was no different, when the jet set came together to celebrate “Una Grande Storia Italiana,” a mammoth tome on Valentino’s life published by Taschen.

Festivities began at Christie’s, where pals including Zac Posen and Daphne Guinness dropped by to pay their respects—and about $4,000 for a limited edition volume. Pricey, yes, but some picked up two or three copies­—one for each home, of course.

Afterwards, swells including Julia and David Koch, Samantha and Aby Rosen, and Lisa Airan and Trevor Born met Valentino at Cipriani for an intimate dinner. Anne Hathaway, newly shorn for her role in Jonathan Demme’s film “Dancing with Shiva,” arrived with her boyfriend Raffaello Follieri.

“I feel so fat,” a very pregnant Samantha Rosen said, apropos of nothing. “I told Aby to put me in formaldehyde and stick me in front of Lever House,” just like the planned Damien Hirst projects he’s commissioned.

The multi-course dinner probably did little to alleviate her feelings, but as the noise level soared, it was clear everyone was enjoying themselves. Susan Gutfreund even jumped up from her place at the head table to record the occasion with her digital camera.

But maybe it is true what Valentino says about himself, and those whom he befriends. When guests began to depart, just after midnight, Carlos Souza was making plans with Hathaway for the following day. “Jeans, pizza and a movie at home,” he proposed.