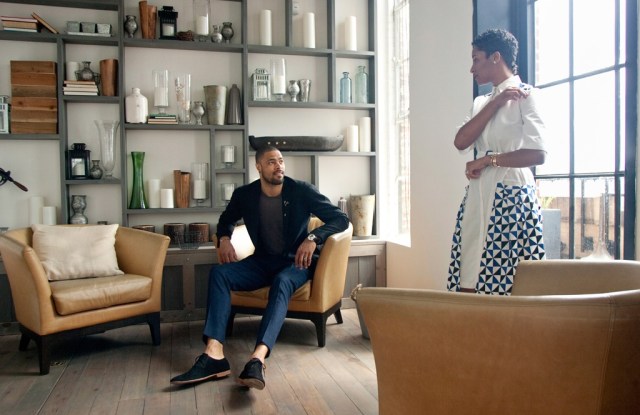 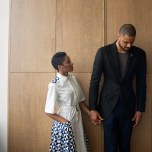 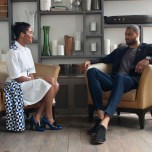 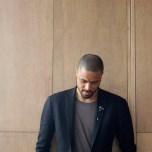 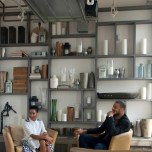 Kimberly Chandler — recent New York Fashion Week front-row ubiquitor, mother of three, Hurricane Sandy relief effort organizer and owner of one of the chirpier personalities in the borough of Manhattan — learned something about her social resilience earlier this month when she attended The Costume Institute gala at The Metropolitan Museum of Art by herself.

“I was so impressed with myself after it was over,” she says a few weeks later. “I feel like if you can walk that red carpet by yourself…I was like, ‘Oh, I’m good for anything else. I’m golden.’ I had a bit of a meltdown and then I pulled myself together.”

It’s a few weeks after she donned a Rodarte dress and strode that red carpet solo. Chandler is sitting in an oversize leather armchair in a faux living room at Canoe Studios on the west side of Manhattan on a humid, occasionally rainy May weekday. Today she wears a white collared Suno dress with black and blue geometric accents on its shoulder and skirt. Though her chair is several times too large, her posture is finishing-school straight. A few feet away, her husband, Tyson Chandler, the 7-foot, 1-inch starting center for the New York Knicks, has no trouble filling out his matching seat.

“I told her right before,” he explains with a touch of audible guilt and the affable smile that belies his on-court scowl. “She didn’t know I wasn’t going. And I went to practice — we lost the night before — I went to practice and I was just like, ‘I can’t. My mind needs to be focused on this series.’”

“I kind of freaked out because I like to experience those kinds of things with him,” Kimberly says of the party later. “But I respected him for that decision so much.”

The previous year, the Chandlers had attended the Met Ball together, as they have a grip of fashion shows, book parties and awards shows since Tyson landed a four-year, $58 million deal in New York ahead of the 2012 NBA season. In the ensuing year and a half, he has become as key a starter as any of the Knicks, a team that had its best season in more than a decade in 2012-13 before the Indianapolis Pacers drummed it out of the playoffs in a painful second round series (during which the Met gala fell). Coming off a regular-season neck injury, Chandler looked far from 100 percent during the playoffs.

“Honestly, I was very disappointed by the way things ended,” he says, declining to speak much more on the topic. “I’m right back in the gym this summer.”

Early exits aside, the just-wrapped season, which featured the debut of an inter-borough rival in the Brooklyn Nets, was the most exciting for basketball in New York in ages. And the Chandlers, both native Californians (they still maintain a home in Los Angeles) who have bounced between five teams over his 12-year career, have assimilated to their cultural surroundings in New York with an ease not always seen among the ranks of professional athletes in this town. Their mutual interest in fashion has certainly helped. In a league currently awash in several men’s magazine trend pieces-worth of flashy dressing, Tyson Chandler sits quietly above the fray of bow ties and backpacks, ultracropped pants and postgame interviews in lensless glasses frames.

For one thing, he goes to the New York shows — sitting front row last season at Alexander Wang, Joseph Altuzarra and Robert Geller, among others. For another, he seems to be paying attention. While Tyson was on the road last year, Kimberly could occasionally be spotted on the social circuit accompanied by her brother, Brown Andrews (who works as something of a creative director-cum-style guru for his brother-in-law), or paling around with the likes of Mia Moretti and Lauren Santo Domingo. Tyson has mounted an exhibition of his photography and the couple joined the producing team for the Tony-nominated “The Trip to Bountiful.”

“We do a good job of adapting to our surroundings,” Tyson says.

“We’ve had to,” Kimberly agrees, knowingly.

“That’s what my livelihood is,” her husband continues. “We felt very comfortable in Dallas. We feel very comfortable in L.A….It’s really just about hitting the ground and taking advantage of the opportunities that are presented to you. We try to develop relationships. I think both of us, when we’re in a city, want to leave whatever our situation is a little better than [we] found it. And every little bit counts.”

On Thursday night, The Fresh Air Fund will honor the couple for their efforts to live up to that last maxim at the organization’s annual Spring Benefit at Chelsea Piers. Shortly after Hurricane Sandy, the Chandlers toured Far Rockaway, N.Y., through their church. Tyson had a stint on the New Orleans Hornets following Hurricane Katrina, and the couple had taken a lead among players in the relief effort there. Following that path, they founded Rebound for Rockaway. With the NBA season by then under way, Kimberly made frequent trips to the Queens neighborhood and would report back.

“It was a community just full of utter devastation,” says Kimberly. “It actually started off as us just banding together doing the distribution [of relief supplies], but when you go into a community and you spend time with that community…we became emotionally connected to them and so it’s really been something ongoing.”

“There were times when I got in at three, four in the morning and my next day was my only day off and didn’t want to go out there, you know dog-tired,” Tyson says. “After hearing her relate stories of how people were doing and just needed something to uplift their spirits, it’s hard to turn that down….It keeps you wanting to go back because it’s not just a name or a picture that you’re returning to, it’s a person.”

With two years left on Chandler’s contract, the couple look to be in New York to see their efforts through for the immediate future. And for another four seasons of ready-to-wear shows.