Over breakfast with WWD, the actress discusses her role as Nessa Stein in the upcoming miniseries “The Honorable Woman.” 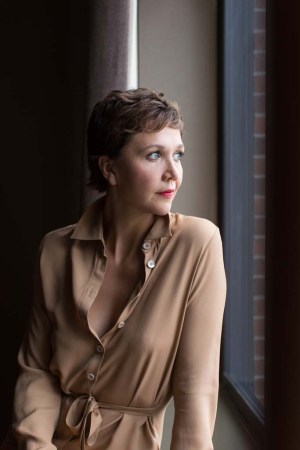 Maggie Gyllenhaal sweeps into Locanda Verde in Manhattan’s TriBeCa neighborhood, punctual to a fault. She orders an egg-white frittata and coffee, and digs into her latest project, “The Honorable Woman.”

Gyllenhaal is full of Nessa Stein, the character she plays in the eight-episode Sundance/BBC2 miniseries that begins airing on the Sundance Channel next week and has a premiere tonight in New York cohosted by Tod’s and the Cinema Society.

Stein isn’t an easy character to shed and Gyllenhaal admits she is still carrying some of the role’s emotional baggage around with her. In the international thriller, Stein, as a child, watches her father, a Zionist arms dealer, get killed. As an adult, she inherits his company, now a charitable foundation in London that’s seeking nothing less than a solution to the Arab-Israeli conflict. “Every fiber of Nessa is involved in this conflict,” says Gyllenhaal. “It’s not just in her brain, which is very agile, it’s in her body and her heart.”

If you’re wondering on what side Gyllenhaal comes down on in the ongoing debate about the upheaval in the Middle East, neither the show nor the actress tipped their hand.

“My particular feelings and personal politics aren’t going to serve this,” she says. “The show doesn’t take a definitive position. It’s asking you to think.”

To prepare for the role, Gyllenhaal informed herself as best she could. “At first, I was just reading The New York Times,” she says. “Then, I called a friend of mine who sent me all these pro-Palestinian leaning blogs and then I ran into a friend of a friend who is a Zionist, pro-Israel intellectual and he sent me a bunch of articles. My heart breaks all the time when I read the news. I know it’s really easy to say that when I’m sitting in my house in Brooklyn.”

Graceful and articulate, Stein, like the actress portraying her, speaks publicly with ease, wears Roland Mouret power dresses and is always even-tempered, even when turning down the bid of an angry former business associate. A character’s wardrobe leads the transformation for Gyllenhaal. “The clothing is always the way in [to the character],” she says. “I never played a character that didn’t care about what they were wearing. Nessa should have been dressed head to toe in Céline, but we couldn’t afford it. So we started calling in favors from people like Stella McCartney, who wanted to help. I thought sex had to be a part of it. That’s important to me, too, in the way I dress.”

Then, tiny cracks start to emerge and it’s harder for Stein to keep up the facade. “What you’re watching is that confidence start to crumble,” Gyllenhaal says. “The reality of what’s really there starts to bubble up from underneath. You’re also watching somebody come alive. Performing yourself is so deadening. As an actress, it’s more of an occupational hazard. Something about my 30s, and I’m right in the middle of them now, is about that crashing down around me. It’s about not being able to keep up the performance and not wanting to.”

Gyllenhaal says her interest in the miniseries wasn’t just the depth of the character, but a script by Hugo Blick, who also directed. “I never read anything of that scope before,” she says. “My fear was of doing something so hard and so personal. I knew it was going to be both exciting and hard. I could see that to do this I was going to have to grow up in a lot of ways. I knew it would hurt because growing up hurts.”

The actress clarifies she doesn’t have it all figured out, but motherhood — she has two daughters, seven and two, with actor Peter Sarsgaard — has grounded her as an adult and enhanced her acting.

“There’s something about being a mother that’s impossible to explain,” she says. “It really, really helps. My children have chiseled open my heart. It was a rock. It’s changed me so completely.”

While it’s been hard to let go of Stein, “I just couldn’t imagine doing anything else for a while,” she says, adding, “I’m going into a new character now,” Annie in Tom Stoppard’s “The Real Thing.” “It’s very different.”