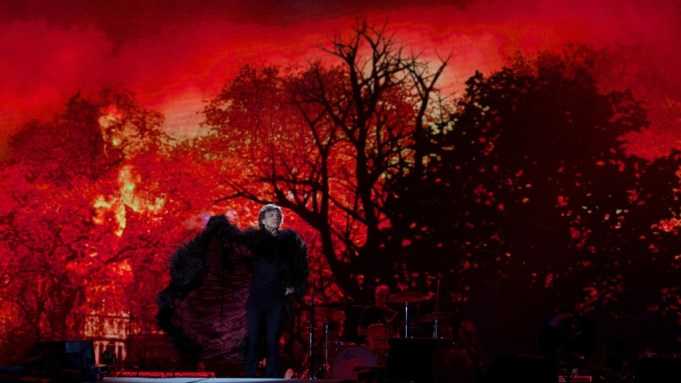 Mick Jagger is a man who keeps his nostalgia in check — it’s there all right, but more as a gesture to his fans than anything else.

He and the Rolling Stones performed in London’s Hyde Park last weekend for the first time since their famed July 1969 concert there, popularly known as “Stones in the Park,” and will be playing an encore Saturday night. But his return to the venue after 44 years hasn’t made him wistful about his younger self, the 25-year-old clad in a white tunic top reciting stanzas of Shelley’s poem “Adonais” before the Stones’ set in a tribute to guitarist Brian Jones, who had died two days prior.

“It’s a different part of the park, the stage is really different,” Jagger said in a telephone interview earlier this week. “[Last weekend] could have been another show, if you know what I mean. But it did evoke some memories when we drove into the park.”

And while he may not be misty-eyed about his return, Jagger was determined to put on a show that in some ways echoed the 1969 performance. He and L’Wren Scott, his girlfriend who designed all of his costumes for the 50 & Counting tour which kicked off in November, came up with a series of new outfits for the Stones’ performances this summer at Hyde Park and Glastonbury. To wit, Scott designed a butterfly jacket in homage to the hundreds of cabbage white butterflies the band released before their 1969 concert. The black embroidered and beaded jacket features colored butterfly designs — large and small. Thanks to lighting and special effects during the show, it looks as if the creatures are flying off Jagger’s jacket.

“I wanted to have something really magical and interesting,” said Scott. “I was really obsessed by phantom butterflies — you see them at night and they are kind of iridescent blue and green and white.”

The famous tunic top also got a new lease of life — in lightweight taffeta.

“We did the shirt-waisted kind of thing, which is the copy of the 1969 one, which I knew I had in orange. The white one I lost — or someone nicked it,” Jagger said. “We did a copy of it. We didn’t know when or where we were going to wear it, but that was a reflection of [the original one].”

For Glastonbury, the annual music festival in the Somerset countryside, which the Stones played for the first time in June, Scott and Jagger took a more pastoral turn.

“We started to think about the Glastonbury show and I said to her that [I wanted] something very English — an oak leaf. That’s where we started from in the Glastonbury show, nobody [in the audience] realized they were really oak leaves [on the jacket] — but I did,” said Jagger.

Even if Glastonbury’s crowd of thousands didn’t (or couldn’t) notice every detail on the jacket, the design meant a lot to Jagger. “Yes, it’s important. Most people just think it’s a bright green jacket, but if you look you can see. Glastonbury is an essentially English event,” he said.

Scott said she had originally wanted to do something around a leaf motif for Glastonbury. “So I did some tests of embroidery of leaves and I showed [Mick] a drawing with an embroidery or visual attached,” she said. “He loved the leaf idea, and I said it’s kind of like a ‘glamouflage.’

“We were joking about the glamouflage at Glastonbury, and he said ‘Well I want it to be oak leaf.’ So if you look at it closely you see the oak leaves — it’s quite cool,” said Scott of the sequin-embroidered jacket in emerald green, khaki and black. “It just felt very right for Glasto, to open the show with a very outdoorsy feel — and the crowd was incredible.”

For Saturday, other looks Jagger is due to wear include the big gorilla coat that Scott designed for the tour, a floor-length number covered with hand-embroidered ostrich feathers and lined in metallic bordeaux lace, a reference to the Walton Ford gorilla design on the band’s latest album cover. There’s also an embroidered jacket inspired by the paintings of Gustav Klimt, made from silk, gold leather and metallic threads. Scott said she knew it would be ideal for an outdoor summer performance because of the setting sun’s rays would hit it and make it glow even more.

“I said, ‘Look it’s going to be beautiful because you have the gold in the light, and it’s not going to be nighttime when you go on stage, and this is going to have so much stage value and light.’ I [also] made him a special python belt that he wore — in gold,” said Scott.

Saturday’s concert in Hyde Park marks the end of the tour, although it remains to be seen whether it will really wrap up.

“My studio has the joke ‘And counting…’ because they are still counting every time I say we have to make a few more things. Mick really knew what ‘And Counting’ actually meant,” Scott said.

So there may be more to come. No matter what happens, Jagger said he’s had fun with his vast, glittering wardrobe by Scott.

“I got to wear all the clothes we made, which was fun from our point of view — just switching around all the outfits every night in different places, wearing them here — but not there,” Jagger said.

His highlights included the very first show when he appeared in the black-and-white “zigzag swag” jacket that took its design cue from the matching houndstooth jackets the Rolling Stones were asked to wear for a TV gig in England in 1964.

“There was this really beautiful velvet jacket, really romantic with these gold epaulets, which I only wore a couple of times because I thought it was so romantic. Glastonbury was definitely a highlight and then Hyde Park. There were a lot of highlights for me,” he said.