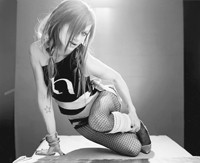 LOS ANGELES — Striding into the Four Seasons Hotel with her bright red hair and leopard print Marc Jacobs sweater, Sarah Hudson, 22, is the very picture of Hollywood rocker chic — until she opens her mouth. “I rode my bike here,” she says. In pink patent heels? “Oh no, the bike-riding shoes are in my bag,” she explains, patting a green studded purse.

Though she speaks in a girlie Southern California drawl, Hudson’s singing voice is every bit as angst-filled and powerful as that of Alanis Morissette. And the autobiographical tracks on her debut album, “Naked Truth,” due out in April from S-Curve/EMI, don’t shy away from the hard stuff, either. They detail both her father’s infidelities and her best friend’s suicide. “I wanted to write about parents, growing up and fitting in instead of breaking up with your boyfriend or how you want this guy,” Hudson says.

But while Hudson’s songs are fueled by less mainstream notions, she says she never had to worry about seeming eccentric at home. She describes her father, Hudson Brothers singer and record producer Mark Hudson, as “pretty outrageous. He wears kilts and skirts and has a purple beard,” she says. Hudson considers him a style icon, alongside her mother, Madonna and “Sex and the City” character Carrie Bradshaw (played by Sarah Jessica Parker). For her own part, Hudson likes to mix designer duds from Anna Sui, Miu Miu, Chanel and Blumarine with street gear from Patricia Field and Show Pony, a bit like her cousin Kate Hudson, whom she calls “a talented singer.” “When we were little we would do concerts in my room and my parents would film us,” she says. “We were always performers.”

As wild looking as she may be, Hudson is also the product of a strict Catholic school education. “I was allowed to be myself at home, so Merry Mount helped me not go to that rebel place,” she explains. She still had fun abusing the school uniform. “I’d show up in a fur coat and big platform shoes with fishnets and my hair was bright blue,” she remembers. “I’d constantly get in trouble. But I liked that.”

After high school, Hudson attended music school, then got a songwriting deal, performing at local bars Genghis Cohen, The Gig and The Viper Room before making the album. “The stage is where I feel most comfortable. I’d rather sing about my feelings than talk about them.”

Though she seems to have most of the big issues figured out, Hudson still struggles with the problems of the fashion-obsessed. “I made the fatal mistake of getting a Barneys charge card,” she says. “At the end of the month it’s like, ‘Do I buy more clothes or do I eat?’ I definitely have a problem.”