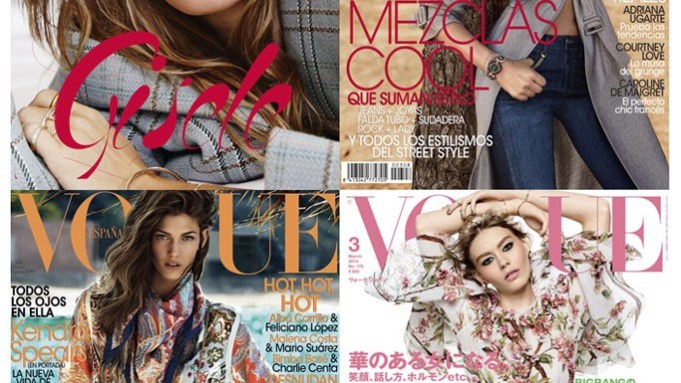 Now, the next tier is coming into prominence in the realm of fashion photography, and these rising talents are using their Italian heritage to their best advantage.

“The fact that I’m Italian has been a plus abroad because people are fascinated by Italian culture, fashion and lifestyle,” said Giampaolo Sgura, one of the more prominent photographers among the new guard.
While they still have to fight aggressive competition of successful photographers from the U.K. and North America, Italians have a distinct advantage, according to Francesco Carrozzini, who relocated to New York years ago.

“Our eyes are used to beauty, and we like to give some warmth to our pictures,” he said. “We like to communicate with the soul.”

Here, the rising crop of Italian fashion photographers reveal how they got started and built their success.

Giampaolo Sgura, who divides his time between Milan and New York, is a fashion passionate, and travels the world to shoot models and celebrities for covers of high-profile fashion magazines, including international editions of Vogue, GQ, Hercules, Interview, Teen Vogue and Allure, among others.

“I am missing American Vogue, that’s totally my next goal,” admitted Sgura, 39, who cut his teeth at Condé Nast Italia shooting for small sections of Glamour and L’Uomo Vogue.

The photographer is also a favorite of international brands, including Giorgio Armani, Roberto Cavalli, Max Mara, Fay and Dolce & Gabbana, which over the years have asked him to shoot their advertising campaigns.

“With my pictures, I always try to catch beauty, a classic form of beauty — beautiful clothes, beautiful women, beautiful men,” said Sgura, who says his style is constantly evolving.

“In the Eighties, photographers had to stick to a specific style, but nowadays it is different,” he explained. “Digital cameras changed everything.”

With his perpetually boyish looks, Pierpaolo Ferrari, 42, has the attitude of someone who never takes himself too seriously. And, probably, this is one of the reasons behind the success of this Milanese photographer, who is internationally considered one of the brightest stars on the Italian contemporary artistic scene.

Ferrari began his career focused on advertising photography, collaborating with major agencies and brands, including McCann Erickson, Saatchi & Saatchi, Nike, BMW, Ray-Ban, MTV and Heineken, among others. “I pay attention to everything that happens around us, both in terms of culture and aesthetic.”

In 2007, Ferrari met Vogue Italia editor in chief Franca Sozzani, with whom he “started an amazing collaboration at L’Uomo Vogue,” he said. Two years later, Ferrari shot Linda Evangelista in a striking and controversial editorial for the art issue of W, which ran in November 2009, which he named as one of the milestones of his career, along with the fall 2013 campaign he realized for Kenzo.

“That campaign definitely marks a division between my current activities and my previous works, not only for me but also for what is currently happening in the fashion advertising business.”

Following the launch of the Le Dictateur publication in 2011, Ferrari teamed up with superstar artist Maurizio Cattelan to create unconventional and provocative art magazine Toilet Paper, “which takes 120 percent of my time,” the photographer said.

“Of course, my background and my family have had a huge impact on what I am now — fashion and art have always been part of my life,” said Carrozzini. “My mother is my only professional mentor, she has always advised me.”

But, even if talent might be hereditary, passion and determination are personal qualities, and Carrozzini has demonstrated those in abundance since he was a teenager. At 19, while a college student in Milan, he kick-started his career by directing a promo for Italian MTV. Documentaries, commercials and music videos followed, as well as important photographic assignments from international magazines, including Vanity Fair, L’Uomo Vogue, The New Yorker, W, Rolling Stone, Pop, New York magazine and, not surprisingly, Vogue Italia.

Among his numerous works, Carrozzini cited in particular the portrait of Keith Richards he shot for the cover of L’Uomo Vogue’s January 2009 issue.

“I was 25, and I think that can be really considered the turning point that legitimized my career,” the photographer remarked.

“After 10 years of work, I can say that these people don’t hire you because of your pedigree,” Carrozzini noted. “I’ve always done my best to demonstrate by working with dedication and diligence that I’m part of this game — and not just because of my family.”

“I decided I wanted to be a photographer at 16,” said Lorenzo Bringheli, now 32.

After graduating from high school, Bringheli started assisting a number of Italian photographers before going solo at age 20, when he got his first fashion editorial assignments from Italy’s La Repubblica weekly magazine, along with Vogue Italia and L’Uomo Vogue.

“Then, Franca [Sozzani] suggested that I check out the American market, so I moved to New York, where I stayed for 10 years, but I continued to work in Europe at the same time,” said Bringheli, who has also collaborated with Vogue Japan, Esquire and the British Exit magazines, as well as shooting campaigns for fashion labels.

Describing his style as “graphic and essential,” Bringheli got passionate about working on photography books.

“They allow you to work on a deeper level than fashion editorials, which are destined for rapid consumption,” said Bringheli, who, as well as developing publishing projects with Dolce & Gabbana and Luxottica, also took the pictures featured in Tod’s “Italian Portraits” tome.