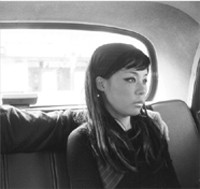 What’s left unseen in artist Nikki S. Lee’s latest series, “Parts,” at the Leslie Tonkonow gallery, is almost as intriguing as the witty images themselves. “I take pictures with a guy like a couple, then I cut him out, though you can still see his shoes or his hair,” she says. Posing in locations that range from the backseat of a London taxi to the delivery room of a Memphis hospital, Lee appears variously as an ice queen, a wacky chick and a teary suburbanite, always with a mysterious man — known only by his parts — lurking nearby. She hopes that her curious photos will spur viewers to imagine the relationships she shares with her male counterparts. “I want people to think about how I’m identified by the relationship,” says the artist.

As with her last series, “Projects,” which earned the 32-year-old plenty of buzz, Lee herself appears in every photo, all snapped by a friend. And as she did with her previous series, for which Lee immersed herself in various subcultures, sometimes for months at a time, posing as a homegirl, skateboarder, tourist, stripper and senior citizen, Lee has taken an anthropological approach.

This story first appeared in the November 6, 2003 issue of WWD. Subscribe Today.

“People don’t live in an isolated way,” she says. “Their identities are affected by who they’re with and that holds my curiosity.”

While her art is often compared with that of Cindy Sherman, Lee, who moved from Korea to the East Village in 1994, is making her own way in the New York art world.

“The newer work is less confrontational than what she’s done before,” says Christine Y. Kim, a curator at the Studio Museum in Harlem, who calls Lee one of the most important artists of color of her generation. “She has just as much conviction, but is using a more tender language.”