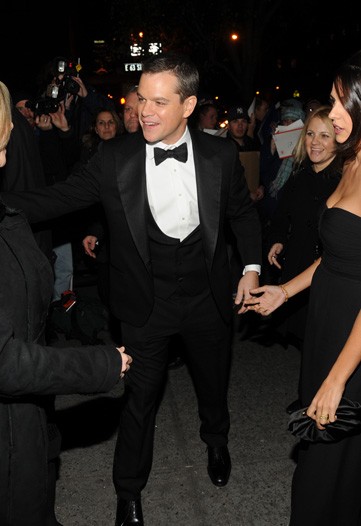 If he had the spare time or inclination, Clint Eastwood could give his fellow actors lessons in grace. On the red carpet Tuesday night outside the Paris Theater, as Morgan Freeman and Hilary Swank merely posed for photos and skipped interviews, Eastwood, who was being honored by the Museum of the Moving Image, gave one-on-one face time to every reporter.

“I don’t think I’m intimidating once you get to know me,” he said, even engaging in some playful banter with Swank.

“Hil looks swell. How are you doing darling?”

“You look handsome,” she said back.

“Thank you, dear. We’re gonna get you an ophthalmologist right away,” said Eastwood.

It was just one of many glimpses at Eastwood’s work and demeanor over the course of the night. After a special screening of his forthcoming directorial effort, “Invictus,” starring Morgan Freeman as Nelson Mandela and Matt Damon as the South African rugby captain he supports and befriends, groups of black tie-clad guests were bussed over to 583 Park Avenue for the museum’s salute to Eastwood. Arie and Coco Kopelman, Ralph and Ricky Lauren, Coralie Charriol Paul, Kelly Rutherford, Kyra Sedgwick, David Lauren and Lauren Bush ate a speedy dinner before viewing clips from the 79 year-old’s oeuvre including “Unforgiven,” “A Fistful of Dollars” and “Million Dollar Baby.” An impressive lineup of actors paid tribute to his seemingly boundless talents.

“I’ve kind of come to judge good jobs and directors by how my wife feels about them. My wife loves Clint Eastwood,” said Damon, the first of the presenters. “Not only because her husband was happy every day when he came home, because I got to do what I wanted to do, the way I wanted to do it and felt completely fulfilled creatively but because I had breakfast with her and the kids every morning and dinner with them every night. I never felt I was sacrificing family life or my work it was the perfect blend. And that’s the life I hope I can carve out for myself as I go forward.”

“Like many of you in the room I knew him as Rowdy Yates and I had a girl crush that gave way to fear and a little bit of lust I’ll admit it when ‘Dirty Harry’ came out and so when I met him for the first time on the set of ‘Space Cowboys’ this one dimensional idea of Clint didn’t serve me very well,” she said. “He came into the hair and makeup trailer and the 13 year old girl in me took over and I flung myself across the trailer and hugged him and said, ‘Hi, I’m Marcia Gay Harden.’ And he said, ‘I know, I cast you.'”

For Kevin Bacon, an Eastwood casting proved a life-changing experience.

“A very, very famous and amazing actress once said to me if you ever have the chance to work with Eastwood, just do it, just say yes, just say yes, don’t read the script, just say yes. And I would tell you who the actress was but Bob Dylan told me never to drop a name. So I said yes and I got the chance to work with him. But what she didn’t tell me was that for the rest of my career I would be answering questions about what it was like to work with Clint,” recalled Bacon. “How does he do it? How does he make one brilliant film after another? How does he make it look so easy? And I tell them what I’m going to tell you here tonight – I have no freakin’ idea. I’m just so happy I said yes.”

Swank kept her remarks short and sweet, in keeping with the honoree’s famously succinct speech. “So since Clint has made an art of playing characters of few words, I’ll follow his lead. I love and I adore you. I can’t tell you how thrilled I am to be here to honor you and I truly can’t think of anyone more deserving of this worthwhile tribute,” she said.

And Freeman confessed to a bit of a man-crush on his friend and director.

“It’s such a pleasure to see all these clips this evening and be reminded of Clint’s genius. Maybe we’ve seen most if not all of them before but watching them again reminds us that as an actor Clint is absolutely impossible to stop looking at. And I’m straight,” he said to much laughter.

When Eastwood finally took to the stage, to a standing ovation, he was clearly humbled by the proceedings.

“You can have a little bit of skill, but you’ve gotta have a lot of luck and the only thing I’ve ever really been good at was picking other people to be around me to make me look decent. And that goes for the crew right on up to production and casting. Maybe I was smart to cast Morgan Freeman, and Matt Damon and Kevin Bacon and Marcia Gay Harden and Hil the Swill, my boxer. We’ve had some wonderful times. It made a senior citizen very happy tonight,” he said. “You saw me make my day and I shot people and all that stuff and I guess that was great fun. I looked at that ‘Fistful of Dollars’ clip and thought, God that’s opera at it’s very worst, but it’s so much fun to do, and people ask me ‘Do you miss doing those kind of things?’ and I say, ‘No I don’t miss them.’ They were great fun at the time, but it’s much more fun to be doing other things because as you get older you get wiser hopefully, some of us do and some of us regress and hopefully I’m not regressing.”