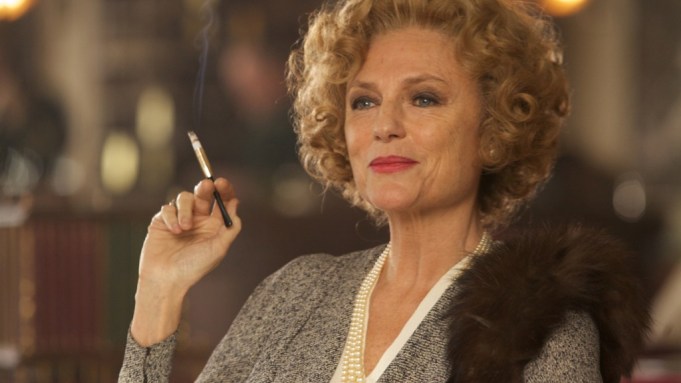 Jacqueline Bisset, the British actress once described by Newsweek as “the most beautiful woman of all time,” is expanding her repertoire to include a new historical fiction miniseries, “Dancing on the Edge.”

Bisset — whose early roles include the seductive character Miss Goodthighs in the 1967 James Bond spoof “Casino Royale,” the girlfriend of Steve McQueen in the 1968 action drama Bullitt,” and who caused a sensation in the 1977 film “The Deep” by swimming underwater in little more than a T-shirt —has made a seamless transition from leading lady to character actor in both Hollywood and Europe.

The new miniseries, in which Bisset plays the character of Lady Lavinia Cremone, an elegant and extremely wealthy recluse, is set in the early Thirties and follows a group of black jazz musicians who entertain London’s upper-class society. The American entertainers encounter racism and class prejudice among other unpleasantries such as a sordid murder. Directed and written by Stephen Poliakoff, the BBC production is set to air this Saturday [Oct. 19] on Starz. It will mark American-based Bisset’s return to a U.K. drama after nearly 40 years. Her last British film was “Murder on the Orient Express” in 1974.

Bisset says she enjoyed her role as Lady Lavinia, whose straightforward yet complex persona is not unlike Bisset’s own predilection for privacy, the arts, and “living an interesting life” with famous boyfriends such as the late Russian-American ballet dancer and actor Alexander Godunov.

“She has lost three boys in the Great War and lives on a very large estate. She’s quiet and reclusive, but when she hears about a black jazz band from music reporter Stanley Mitchell [played by Matthew Goode], she perks up and invites the band to stay at her estate. She gets drawn in, supports them and encourages the two female singers,” says Bisset. “The upper classes were quite racist at the time. My character is not a racist but she does get tested…there’s a murder, and there’s a sort of ganging up going on, and the band leader, Louis Lester [Chiwetel Ejiofor], believes he is being set up.”

Bisset added that the plot’s twists and turns are further complicated by an eccentric and powerful American mogul, Walter Masterson [John Goodman], who “weaves people’s lives with his knife” to have his way.

The time frame is 1932 and the fashion of the period is skillfully captured by costume designer Lindsay Pugh, known for her work in “Charlie and the Chocolate Factory” with Johnny Depp, and “Quantum of Solace” starring Daniel Craig.

Bisset described the era as an “elegant, flattering time in fashion.”

“Most dresses were cut on the bias and the clothes were quite fun. My character was quite chic and wore lots of fur. I’m dressed in context with the character in dark colors such as maroon, navy and black.

Undergarments set up the shape of the time, stretchy things under the clothes, but nothing antique was used,” Bisset noted. “There were wonderful hair and makeup artists who also did ‘Downton Abbey,’ but some of the hats I wasn’t mad about — a bit mumsy for me.”

The topic moves to Bisset’s career, which has spanned five decades working with some of the most acclaimed directors including John Huston, George Cukor, François Truffaut and Claude Chabrol. Her leading men have included Frank Sinatra in “The Detective,” Peter Sellers in “Casino Royale,” and Charles Bronson in “St. Ives.”

“I didn’t enjoy Peter Sellers very much — he wasn’t very nice with me,” stated Bisset. “But Charles Bronson was very sweet, kind of like a grumpy bear, and he was quite shy. It was a funny mixture, a family man who had a big family, and would impatiently say  on the set, ‘shoot, shoot,’ because he wanted to be home in time to eat dinner with his daughter.”

“Sinatra was very nice, kind, encouraging, and protective because someone on the set was being hard on me. He said, ‘Leave the kid alone. She’s got good instincts.’”

Her upcoming films include “Two Jacks,” a comedy-drama starring Sienna Miller and Danny Huston, and “Welcome to New York,” a drama with Gérard Depardieu about the infamous former head of the International Monetary Fund, Dominique Strauss-Kahn.

Regarding future TV miniseries, Bisset mused, “I hate blood and violence, but would love to play a very wicked character.”