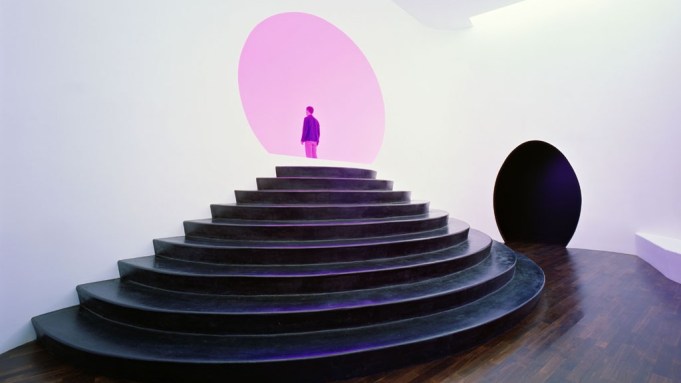 Las Vegas, a city known for lights (the neon, blinking and staying-up-until-dawn varieties), is where fans of artist James Turrell will find his latest work, “Akhob,” which debuts Friday at the Louis Vuitton CityCenter Maison.

The third of three works commissioned by the house, “Akhob” treats viewers to an elevated exploration of light and color and its interaction with space. “We have a lot of misconceptions about light. Usually we are illuminating things instead of looking at the light itself. But I like this quality of the light being the revelation,” said Turrell, who was in Las Vegas two days prior to show the work to a small group of local customers assembled for an in-store dinner in his honor.

Given the ample amount of space in the desert city, it’s fitting that Las Vegas is the permanent home of Turrell’s largest “ganzfeld effect” project to date, at 77 feet long, 33 feet high and 44 feet wide. The term refers to the phenomenon of visual perception most often studied by staring at an unstructured uniform field of color.

But it’s an overly simplified phrase for what awaits viewers at the by-appointment-only installation. Open Thursday through Monday from 11 a.m. to 8 p.m. and limited to six viewers at a time, the work is an immersive event, the antithesis of a fly-by visit to a crowded museum.

Accessed via an elevator to the fourth floor of the Maison, the installation begins in a dim, dark wood-paneled reception area, where guests perch on a tan leather couch to hear a short background lecture on the work from a trained Vuitton staffer. “Akhob” is a word from the Amarna Period in Egypt meaning “pure water.” From there they are led into a pure white “pyramid chamber” where they don white booties to protect the pristine surfaces, and ascend stairs into two colorfully lit chambers to experience a 24-minute light show of sorts. As the colors change, viewers literally lose themselves in the silent, light-filled void. To prevent anyone from stumbling into walls or pitching over a precipitous drop at the far end of the space (an alarm will sound if anyone gets within 18 inches of the edge), two white-suited art students stand at attention, also offering a hand up and down the polished stairs.

Settled back into a velvet chair in a VIP salon of the store, Turrell gives an appreciative eye to the airy space, which opened in 2009. “There’s so much unused space here it’s bizarre,” he said. “Because [architect Daniel] Libeskind makes these shapes that collide and come together at odd angles, it gives you some really interesting spaces above the stores.”

Turrell said he had a vision for “Akhob” after seeing the CityCenter space three years ago. “I make things totally impossible and exceedingly expensive, and then I come to some reality,” he laughed. “It’s difficult for people to visualize from my drawings what it’s going to be, so I often find myself talking them into things that they go along with, and when they see what’s been made they are surprised.”

Turrell’s first work for Vuitton, “First Blush, Oct. 2005,” was a modular light-based sculpture projected on a flat screen in its Champs-Elysées flagship in Paris. His second, “Traveling Light,” for the house’s 2006 Icons exhibit at its Espace Culturel, reinterpreted a Vuitton wardrobe trunk into a traveling light box that was photographed on its journeys to other Turrell works. Known also for his use of natural light in his 80-plus “skyspace” works, Turrell uses LED lights for his artificial light works.

“Art inspires luxury, as luxury inspires art. This is why we have rich relationships with artists all over the world, be it curating exhibitions in our Espaces or more collaborative work with artists related to our products. These artists often become friends; it was the same with James Turrell. Having had the chance to collaborate with him in the past, we nurtured this relationship into the beautiful piece at CityCenter,” said Valérie Chapoulaud-Floquet, president and chief executive officer of Louis Vuitton North America.

Turrell, who turns 70 on Monday, was raised in Los Angeles as a Quaker but understood the relationship between fashion and art from an early age.

“My aunt was Frances Hodges, who in the Fifties was the editor of Seventeen and later one of the creators of Mademoiselle. She was my Auntie Mame; she loved culture. She was a Quaker, but she became a milliner against all Quaker logic — they feel that fashion and art are vanities — because she loved fashion. It’s something that I’ve always really enjoyed. Art is different in that respect because we don’t have to put out a line, except you are known for a certain kind of work, so it’s kind of like a line.”

Turrell and his third wife, Kyung-Lim Lee, also an artist, are based on a 155-square-mile ranch in Arizona and also maintain a New York residence and studio on Gramercy Park.

What does a man who deals in intangibles like light and space make of being commissioned by one of the world’s largest fashion houses? “It does [seem strange] but you have to remember that Mr. [Bernard] Arnault is quite an art collector,” Turrell said of the chairman and ceo of LVMH Moët Hennessy Louis Vuitton. “I have made things for Calvin Klein and other designers, and it’s interesting to see the way each person approaches it.”

As for the notion of exclusivity in his art, Turrell said, “This is designed to be a more private and intimate experience because someone is needed in there [with viewers] taking care they don’t just pitch into the space,” he said, referring to the ledge at the end of the double chamber, which he deemed necessary to achieve the proper lighting. “Most of my pieces, frankly, are made for one. I try to be an ideal viewer, but after I do a large exhibition I’m so fried from putting it together — it’s like doing a runway show — that I don’t even see it myself. So I often realize that other people are probably seeing it more than I am.”

He added that he likes to be a “full-service artist” by working in more inclusive art forms; his projects have included collaborations with Karl Lagerfeld and Philip Glass on opera and dance productions, respectively. (Lagerfeld has said that Turrell is his favorite artist.)

This summer, almost five decades of Turrell’s work will be celebrated with three concurrent shows at the Guggenheim Museum in New York (which will have six works, including a new project that will transform its entire rotunda), the Los Angeles County Museum of Art (a 14-work retrospective) and the Museum of Fine Arts in Houston (eight works).

Given it will take three major museums to house just a fraction of his work, has the moment finally come when he feels like he’s made it?

“Well, that never happens. I don’t know if artists are all greedy, but it never seems like you’ve made it. That’s the strange little conundrum. You get this postpartum letdown after an opening where you think, ‘Well, that’s kind of it.’ You leave to do new work and the show takes on a life of its own. So there is a little disconnect between the audience,” he noted.

While he has works in 25 countries and 21 states in the U.S., most art has a far smaller viewership than other events. “On most Sundays in most cities, you will get 60,000 to 100,000 people showing up for football, and if an art museum gets 100 to 150 people, they are happy. That’s in a whole year. It’s a totally different thing. The same is true of fashion. But it does have its influence.”

While Turrell’s art is far from a commodity like fashion (taking home an extinct volcano, a sky space or an artificially lit void isn’t exactly easy), he thinks the public’s desire to possess beautiful things has damaged rather than enhanced the art world.

“One of the biggest disconnects between the artist and public is the public is often looking for something they like or something they might like to own,” he said. “And the last thing on any artist’s mind is trying to reaffirm or enforce your sense of taste. In fact, they even might like to challenge it in some way. But times change. You once had artists as preeminent, then dealers, and right now it’s collectors. They want a trade show, what we call an art fair, where they can see everything, compare it and take it home, so it limits the ambition of art. And that’s been a very destructive influence.”

Turrell’s ambition is far from limited, as is evident in “Roden Crater,” his ongoing creation (begun in 1979) of a naked-eye observatory built into an extinct volcano he purchased in Flagstaff, Ariz. Turrell noted, “I would like it to be finished, but I’ve always liked the idea of the journey, too. It’s one of the reasons we love travel and spend quite a bit on it. That’s why I have works in Tasmania and Norway and Jerusalem and Japan, because these are places you will make the trek. You really have to submit to it.”

Drawing one last comparison to fashion, he observed, “Fashion requires submission, too. I’ve watched Daphne Guinness get up there and wear some of the most spectacular, painful and dangerous-looking shoes for designers. I’ve also seen her fall, but she’s such a good sport about it. And I think, ‘Wow, there really are people who will do that and spend that money and submit for that experience.’ Sometimes you can’t even get the models to do it. But she does it full-on, and that’s what you want.”