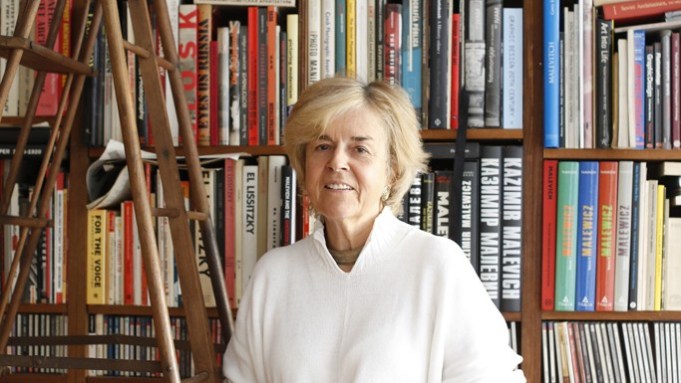 The sitting room in Jane Garmey’s apartment on New York’s West 55th Street is filled with amazing examples of Russian Constructivist printed ephemera, from posters to book covers to notices. There are also a lot of books about the topic on the shelves. This has nothing to do with her new book, “Private Gardens of the Hudson Valley,” with photographs by John M. Hall (The Monacelli Press).

But although the collection was put together by her late husband rather than herself, it shows her eclectic taste, which is one of the underpinnings of her new book. So do her two Burmese cats, the younger of whom, Pandora Box, is particularly friendly and personable. Pandora insists on climbing on the library ladder to be in the portrait photos, occasionally ruining a shot by showing her derriere. Garmey has written about English food (“Great British Cooking: A Well-Kept Secret”) and has written another book about private gardens — this one “Private Gardens of Connecticut.”

The writer, who is from Henley-on-Thames, came to the U.S. as a young woman, fell in love with New York and never left. For 12 years, she had a television production company with her friend Alice Trillin, the late wife of Calvin Trillin. But when Alice died in 2001, Garmey didn’t want to run the company by herself, so she began writing books. “She was a larger-than-life personality,” she says of Alice.

She describes some of her favorite plants: plecanthrus, Russian sage, tithonia, hydrangea, mountain mist, euphorbia and verbena. But she declines to choose her favorite of the 26 gardens she writes about in “Private Gardens of the Hudson Valley.” She chose them partly by word of mouth, since the owners of one garden would suggest others to her. But she insisted on one qualifying detail: that the owners of the gardens be hands-on in caring for them. Once, she went to see a likely prospect and was shown around by the garden designer. When she asked about the owners, however, the designer said that he had never met them. The garden was ruled out.

Gardens, she says, show as much about the personality of their proprietors as apartments and houses do. “There’s no prescribed way to do a room,” she says. She also isn’t interested in newly planted gardens, believing that they take time to grow. Her own garden turned out to be more formal that she expected; she particularly likes hedges and hornbeam. “I love green,” she says. “I’m drawn to green.”

British gardeners have it much easier than American ones, she believes. Britain, after all, has only one climate zone, while America has many. “We have frost in May, snapping turtles, bear and deer,” she says of America’s gardening challenges.

The beautiful, colorful, often very green pictures in the book show off a great variety of ideas and plantings. Duncan Brine, for instance, an art director for a television series, created a garden for his wife Julia’s empty backyard by planting seeds in concentric circles — he ended up with a new business in garden design. Now they have their own garden in Pawling that relies on native plants. Helen Bodian, for her part, created a large rock garden in Millerton, along with an inviting vegetable garden. Their architect Peter Gluck suggested that she follow the Japanese pattern of repeating plants and arrangements on a different scale, and she did this.

“The garden is essential to me, because it satisfies my urge to tamper with the land, and I don’t think that this is an urge that will ever leave me,” says Stephen Mazoh, who has contoured the hills on his Rhinebeck place with trees including magnolia, oak and red leaf maple, and made three linked ponds from an original pond on the property. There’s also an apple orchard and a swimming pool. John Driscoll’s Garrison acres, originally created by architect and industrial designer Paul Mayen, are full of pyramids, belvederes, pavilions, obelisks, fountains and a grotto.

“Our garden is the place I most want to be,” says Madeline Hooper, whose property is in Canaan. It’s the center of our lives,” says her husband Ian. They have a lavender garden with walls of hornbeam and a pool surrounded by a garden. Then they created a lake and a bright sundial garden. Then there’s Richard Eagen’s garden in Hudson, which English garden writer Mirabel Osler might have been describing when she says that a back garden has “a mysterious quality that lulls you into feeling secluded.”