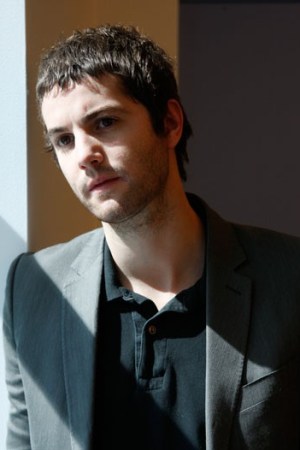 On a muggy morning in the middle of an August heat wave, British actor Jim Sturgess cuts a cool cat figure across a Times Square office. His pewter gray suit is skinny and appropriately rumpled; his brown lace-ups are artfully scuffed, and his close-cropped hair is mussed just so. He’s one cigarette and a whiskey away from headlining the hippest indie band in town.

But Sturgess’ drink of choice is English Breakfast tea (the “closest thing to home”) and his manner is good-natured when discussing his latest film, “Fifty Dead Men Walking,” opening today (Friday, Aug. 21).

This story first appeared in the August 21, 2009 issue of WWD. Subscribe Today.

Based on the memoir of the same name written by Martin McGartland, the movie follows a young Irish hustler who is recruited by the British Metropolitan Police’s Special Branch to infiltrate and spy on the Irish Republican Army. Against the backdrop of an extremely violent 1988 Belfast, Martin (Sturgess) must navigate the emotional and physical challenges of saving lives, while betraying his close-knit community. Sir Ben Kingsley is Fergus, Martin’s handler.

“I was constantly swinging from feeling like a hero to feeling like a rat,” says Sturgess of the experience (the real life McGartland’s cover was compromised and he remains in hiding).

The London native had a deep commitment to his role. Along with Kevin Zegers (who plays Martin’s IRA buddy), Sturgess settled in Belfast a month ahead of filming and fully immersed himself in the local community. The two actors went to house parties, joined a boxing gym and met with former IRA and Special Branch agents.

“It was to put a face and personality to these terrorists, to actually spend time with them. It just upset and confused me more than anything,” says Sturgess, who saw an interrogation room and how bombs were made. “It’s easy to have the image of balaclava and the gunmen and not go further than that. That was certainly my interpretation of the IRA as a young kid growing up in the Eighties.”

Sturgess even stuck with a Belfast accent (he studied with a coach) for the duration of the shoot, refusing to drop it between takes or when phoning home to his mother.

“She hated it! She was like, ‘Speak properly! I can’t understand what you’re saying,’” he laughs.

It was an approach that impressed his veteran co-star.

“I did not know Jim’s real voice until months after the film,” says Kingsley, who calls him “immensely thorough. Totally dedicated to serving the character and the narrative.”

Though he has been passionate about performing for years, from childhood plays to studying acting, screenwriting and editing at university in Manchester, Sturgess’ laid-back, unassuming mien can disguise his drive.

“It’s not that I didn’t have any ambition,” says Sturgess, 28, also an avid musician who once considered a singing career. “I just didn’t believe that I could be in proper films.”

He has proved otherwise. Ever since his breakout as the lead in Julie Taymor’s 2007 “Across the Universe,” Sturgess has worn the mantle of “hot young actor.” He appeared in “21” opposite Kevin Spacey and has just finished shooting Peter Weir’s “The Way Back,” with Colin Farrell and Ed Harris, his most difficult project to date.

“It’s about these prisoners who escape a labor camp in Siberia and walk on foot from Siberia to India,” he says. “There wasn’t a day when I wasn’t either freezing cold or walking through the Gobi Desert sweating like I’d never experienced before.”

Needless to say, Sturgess has been enjoying his current domestic break, setting up his new apartment in Camden, north London with girlfriend Mickey O’Brien, keyboardist for “It” synth-pop group La Roux.

“I’ve never enjoyed painting a radiator so much in my entire life,” he says.