Coco de Mer founder Sam Roddick spent much of the past few days scouring Manhattan for 400 condoms in a rainbow of colors. 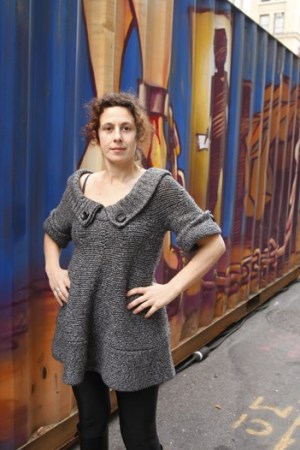 NEW YORK — Coco de Mer founder Sam Roddick spent much of the past few days scouring Manhattan for 400 condoms in a rainbow of colors.

Needless to say, her hunt piqued store owners’ curiosity. “They were all looking at me like, ‘What are you getting up to?’”

Amused as she was by their reaction, Roddick was on a serious mission, searching for a few last minute add-ons for today’s launch of “Journey,” an art installation that depicts the harrowing journey of a teenager who was trafficked into the sex industry. Visitors pass through seven shipping containers — each with a different theme — to get a sense for the various stages faced by Elena Varga, a Moldavian girl who was misled into a life of prostitution. During a preview Monday of “Journey,” which is set up on Washington Place on the eastern edge of Washington Square Park, Roddick said older women often befriend young girls for traffickers. “Elena was sold for $500,” Roddick said.

Roddick teamed up with actress Emma Thompson to develop the concept and to curate the project. Roddick’s late mother, Anita, founder of The Body Shop, and Thompson were big supporters of the Helen Bamber Foundation, a U.K.-based human rights organization that “Journey” supports. (As a young woman, Bamber was part of the first rehabilitation teams to enter Bergen-Belsen concentration camp, and decades later she was one of the first member of Amnesty International.)

Thompson and Roddick are expected at this morning’s unveiling with New York Mayor Michael Bloomberg. “Journey,” which was first staged in London’s Trafalgar Square in 2007, is being made possible through grants from the Roddick Foundation and the City of New York. It has also been shown in Vienna and will move to Madrid after the installation is disassembled Sunday night. In total, 23 countries have signed up to host “Journey.”

Noting human trafficking is the third-largest criminal activity behind guns and drugs, Roddick said, “What people don’t understand is that it happens to girls all over the world. Last month in London, there were 15 girls who were trafficked after winning a fake ‘Big Brother’ reality show contest. It’s not just about poor countries.”

The New York version of “Journey” has new elements, such as exterior paintings by Antony Micallef and a shipping container covered with photographs by James Ostrer, who met with a handful of prostitutes individually and asked each to shoot him in whatever poses they requested. “We thought it was important to have a customer [shipping] container because there wouldn’t be an industry without the customer.”

Turner Prize-winning artist Anish Kapoor, playwright Simon Stephens, Oscar-winning costume designer Sandy Powell and British graffiti artists Mode 2 are among the other creative talents. Roddick also curated a container — a filthy bedroom with a blood-stained, mechanically thumping mattress littered with used condom wrappers and a soundtrack of someone wailing and being struck.