Josh Duhamel of “Win a Date With Tad Hamilton!” reflects on studliness. 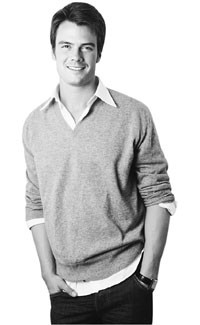 NEW YORK — While actor Josh Duhamel understands the importance of trading on his matinee-idol looks, it doesn’t mean he likes to exploit them.

But now, directors are doing it for him. “I worked for three years on ‘All My Children’ fighting to keep my shirt on. I get my first big feature film debut and what do I do?” asks Duhamel, pointing to a publicity shot for “Win a Date with Tad Hamilton!” which features the actor shirtless, exuberantly toned and sporting a very cheesy Hollywood grin. “Hopefully everybody will see the humor in it.”

Duhamel clearly does. In the comedy, which opens Friday, he plays a studly movie star with a penchant for wine, women and wantonness. In an effort to play down to his bad-boy excesses, Hamilton’s handlers vow to play up his good-guy qualities. They enter him in a charity-related contest and offer him up as the lucky winner’s date. That’s how Hamilton finds himself wrangled into taking out a small town Piggly Wiggly employee played by Kate Bosworth — whom he falls for, of course.

Yet Duhamel (pronounced Doo-MEL) manages to make Hamilton charming despite his caddish behavior. “I didn’t want him to be the typical clichéd movie star, because that would have been too obvious. I wanted him to be a guy who is actually likable,” he explains.

Duhamel’s own winsome nature is likely the product of his Midwestern upbringing and early career aspirations, which fell far from the Hollywood fame game. The 31-year-old North Dakota native counts Dan Marino and Troy Aikman as his heroes and wanted to play pro football since he was a kid. Once he realized his dream wasn’t going to come to fruition, Duhamel majored in biology at Minot State University with the intention of becoming a dentist. Inevitably, he was lured West and after a spate of modeling jobs and the requisite TV commercials, he began landing some acting gigs.

After getting his big break playing Leo du Pres on “All My Children,” Duhamel made it to primetime last fall as Danny McCoy on NBC’s “Las Vegas.” But playing Tad Hamilton was Duhamel’s first comic turn.

“It’s more work to actually find the rhythm of the scene in a comedy, what the funny is,” he says.

Even though he plays a famous film star in the movie, Duhamel’s low profile worked in his favor when it eventually was cast.

“When I first auditioned for ‘Tad Hamilton,’ they wanted the biggest of the big super movie star names to play this part,” he explains. “But then they either had to go with a big name, or they had to go with a nobody. Because if they went with somebody who is middle-of-the-road, nobody was going to believe that he was a big movie star. But if they went with a nobody, then they could just conceptualize the idea. And thank God they did that because I got to do it.”

While the movie will likely launch Duhamel into more leading man roles, don’t expect the playboy behavior to follow. “I have a steady girl,” says Duhamel, who is engaged to be married to his girlfriend of five years, Kristy Pierce, this spring. “I have love in my life, I guess.” Spoken like a true romantic comedy hero.

And although the pro football career didn’t pan out, Duhamel still indulges in athletic endeavors, though he’s brandishing a scar from surgery on a torn Achilles tendon — a basketball injury. “It literally brought me to tears. And I only say that now because I heard that George Clooney did the same thing and that he said he cried when it happened, so I feel OK with that.”