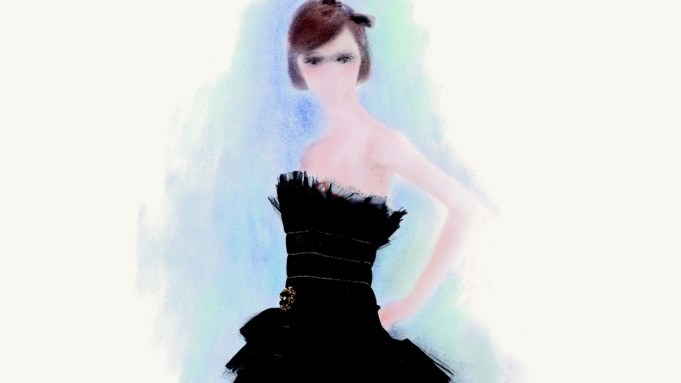 ESSEN, Germany — Prolific doesn’t even begin to sum it up.

Picture 15,000 square feet of exhibition space across 14 rooms displaying more than 400 items, including photographs employing all conceivable techniques and for almost all conceivable purposes; illustrations and caricatures; design objects and films; models of stage sets; runway show videos: seven pieces from the Chanel fall 2013 couture collection — not to mention a vintage poster collection.

“Karl Lagerfeld: Parallel Contrasts,” which opened Friday at the Museum Folkwang here, is being heralded as the “first major museum exhibition on Germany’s most internationally important designer” to present all of his artistic facets.

Just don’t call it a retrospective.

“The word alone makes me blind,” sniped Lagerfeld, who helped conceive the exhibit but, prior to his five-minute run-through Friday, hadn’t yet seen it. “It’s a just a taste of my various spheres of work. The idea was to show the whole.”

And was he satisfied with the results? “Me, satisfied?” he asked. “But between you and me, I find the work the museum and Gerhard Steidl did tremendous, as well as the space. [Architect] David Chipperfield has a talent for such buildings. I didn’t think I was serious enough for a museum like this,” Lagerfeld added in his inimitable winking style.

The showcase opens with a setup of a typical Lagerfeld work environment, outfitted with a desk for writing, sketching or reading. Mountains of books, assorted photo paraphernalia and art supplies strewn about give visitors a sense of “everything he does and how it all comes together,” according to Hans-Jürge Lechtreck, the show’s project director.

Next up is a rare look at some early personal and professional photographic works, from a 1997 homage to Oskar Schlemmer to a Polaroid of Stella Tennant in Biarritz, France, the same year.

It’s clear Lagerfeld borrows motifs and themes from painting for his fashion photography. There are multiple series for Fendi, including a 1988 homage to Ludwig Feuerbach as well as an expressionistic homage to Lyonel Feininger done for British Vogue.

According to Steidl — who with Eric Pfrunder, another key Lagerfeld conspirator, curated the current exhibit — Lagerfeld always says his head is a giant reference book of art, literature and design. Two cases in point: Lagerfeld’s revamp of Faust, and his take on his favorite book, “The Picture of Dorian Gray.” Both were originally shot as fashion spreads for various magazines and later turned into Steidl books.

In Steidl’s estimation, Lagerfeld’s photographic reach is unmatched. “In this year celebrating 175 years of photography, you’ll find here all the techniques used over that time, from daguerreotypes on. For young people interested in photography as a means of expression, it’s all here,” he said.

There’s more: Lagerfeld’s advertising series for such clients as Dom Perignon, Volkswagen, Audi and Schwarzkopf, one of the show sponsors; a cinema with five films he made for Chanel and Fendi; series of portraits and architecture; Lagerfeld’s books, including editions from Steidl Verlag since 1994; Edition 7L, which he founded with Gerhard Steidl in 2000 to publish books about art, fashion and design, as well as L.S.D., founded by Steidl in 2010, which publishes books in German drawn from Lagerfeld’s boundless fields of interest.

The show culminates with a pop-up store stocked with selections from his 7L bookshop in Paris, as well as what Lagerfeld’s reading now or has read: American poetry since 1945; Paul Auster’s “Winter Journal”; Friedrich Nietzsche’s collected works; “How Literature Plays With the Brain” by Paul B. Armstrong, and illustrated tomes on Edvard Munch, Erwin Blumenfeld, Henri de Toulouse-Lautrec and Constantin Brâncusi, to name just a few.

The Essen showcase runs through May 11, and is part of a triple-header year for Lagerfeld in Germany. “Feuerbach’s Muses — Lagerfeld’s Models” opens in Hamburg’s Kunsthalle on Saturday and runs through June 15, presenting 40 paintings by the late 19th century German painter alongside around 60 mostly large-format black-and-white photographs created for the show and printed on silver- and gold-colored fabric. Finally, Lagerfeld’s “Glory of Water” series for Fendi will be heading to the Haus der Kunst in Munich sometime this year.