Partnering with Vital Voices, the Ann Inc. ceo is tapping into the community of nonprofit organizations dedicated to building female leaders worldwide. 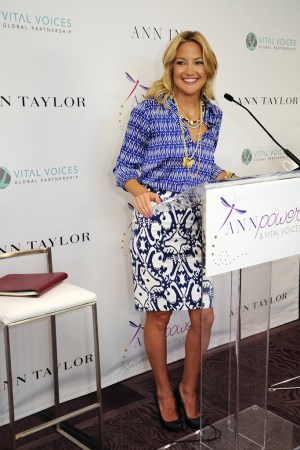 WASHINGTON — Kay Krill, chief executive officer of Ann Inc., the parent company of Ann Taylor and Loft, is building her brand — 50 community activists at a time.

Partnering with Vital Voices, a leading nongovernmental organization founded by Hillary Rodham Clinton in 1997, Krill is tapping into the community of nonprofit organizations dedicated to building female leaders worldwide.

“We have 100 girls now that are going out to make a difference. The first 50 girls [selected in 2012] have really impacted the lives of 5,000 people in one year. That’s important,” said Krill, here Tuesday with actress Kate Hudson to launch ANNpower’s second crop of fellows. “We’re the only ones associated with Vital Voices to give awards to girls for work in their local communities.”

ANNpower chose winners from a stack of 1,000 applicants from rising high school juniors and seniors in 23 states and Puerto Rico. The girls come to Washington for a three-day leadership forum before returning home to compete for up to $2,500 in grant money. Ann Inc. has committed $1.3 million through 2014 to the program and Vital Voices.

“We want to deepen the partnership with Ann Inc. by bringing their employees and executives into it,” said Alyse Nelson, president and ceo of Vital Voices, who envisions a growing number of Ann Inc. executives serving as mentors for the girls, along with Hudson, actress Jennifer Morrison, Krill and herself. “Currently we have just four people on the mentoring board, but we’d like to expand that to 12.”

Out of the 50 ANNpower fellows selected in 2012, 14 girls won grants ranging from $100 to $2,500 each. Among the projects funded were a leadership summit in western Colorado with students from 14 high schools; a youth art program in Seattle to use street art to call attention to the problem of gun violence, and Free2bFemale, a project to distribute free feminine hygiene products to disadvantaged women and girls in Chapel Hill, N.C.

To prepare for their return home to the grassroots, this year’s fellows started their three-day leadership forum with an evening trip to Georgetown’s Loft store, where they had official photos taken and met with stylists to hone their professional looks, with tips on what to wear to an interview and a $100 Loft gift certificate. From there it was back to the Dupont Circle Hotel for a pep talk hosted by Krill, who encouraged fellows to seek out mentors. She then introduced them to a surprise guest, Hudson.

As the girls peppered Hudson with questions, the actress gave each fellow a straight reply.

“I want to look like all the celebrities. But it’s hard just wearing the highest brands, Gucci and Alexander McQueen. I can’t look like that. But I can look like Ann Taylor,’’ said Karly Krasnow from Vero Beach, Fla., who says she heard about the program from her high school college adviser.

Hudson, wearing a black-and-white pencil skirt with a blousy blue Ann Taylor top, got the message. “When you see all those celebrities, they don’t really own those clothes,’’ she confided. “Fashion is art, and sometimes art is really expensive and other times it’s very affordable. Everyone has the opportunity to say what they want with their own fashion statement. When you wrap a scarf around your head or your arm, you are making your own fashion statement. Working with Ann Taylor and with Kay Krill, that’s what the relationship is about. You want people to be able to express themselves and afford it.”

Later, talking to WWD, Hudson admitted despite reports she would be helping to design Ann Taylor’s capsule collection when it launches in May, she didn’t have much input in Lisa Axelson’s design.

“I love everything from accessories to clothes to shoes to purses, but for me, hands down, comfort is number one,” said Hudson, who names her “best girlfriend” Stella McCartney as her favorite designer. “I love all these designers. I’m excited about the new head designer [Fausto Puglisi] at Emanuel Ungaro. I want to see what he’s going to bring to the table. But for me, style, color, shape, that’s all-important. I can’t wear anything if it’s not comfortable. I do have that mom thing and I still like to look fashionable even when I’m running after my 20-month-old. Ann Taylor has that in spades, which is every time I put anything on, whether it be a pencil skirt to a tight pant, it’s always comfortable, whether it be fabric choice or the way it’s tailored.’’

At 10 p.m. the group was still going strong as guests at this year’s Vital Voices awards ceremony at the Kennedy Center, which honored eight international social activists who have risked their lives to stop violence against women and families. Former Secretary of State Hillary Clinton took the stage in what was billed as her first official public appearance since leaving the State Department while supporters marched outside the center carrying “Hillary for President 2016” banners. Clinton celebrated her former White House chief of staff, Melanne Verveer, who helped her found Vital Voices. Vice President Joseph Biden, who also wants to run for President next time around, also spoke. Then the girls went upstairs to join 1,000 guests, including Biden staffers; NBC’s Andrea Mitchell and Ann Curry; former White House Social Secretary Ann Stock, and former Chief of Protocol Selwa “Lucky” Roosevelt.

For ceo Krill, the leap to ANNpower is a natural extension of her commitment to empowering women. “We get honored every year on the NYSE for the highest percentage of women,” said Krill, adding, “When I first became ceo we only had two women on the board. Now there are four including myself. That makes 40 percent, and yes, of course, I’m always looking for women.”