Kiesza Gets Into the Groove

WWD caught up with the 25-year-old Canadian pop star on the rise in Cannes, France, where she parachuted in to fete a collaboration with Fendi. 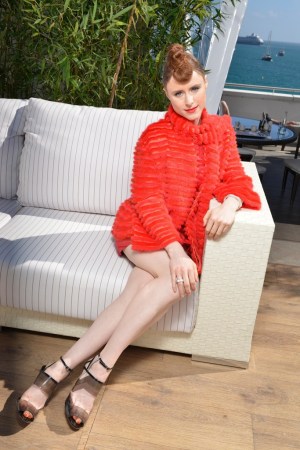 Do not confuse her with Kesha. Her name is Kiesza and she is a 25-year-old Canadian pop star on the rise.

Her debut single, “Hideaway,” shot to the top of the British charts in April, while its video — shot in one dancing-in-the-streets take in Brooklyn — made a strong case for acid-wash denim, bra tops and colorful high-tops.

Unlike the more famous singer with the similar moniker, Kiesza carries the flame for Nineties pop divas.

“I was very influenced by the Nineties, a great era for music that had some of the best ballads ever written,” she says, instantly demonstrating her point with an impromptu rendition of Toni Braxton’s “Un-Break My Heart” as her powerful voice resonates through the rooftops of Cannes, France, where she parachuted in earlier this month to fete a collaboration with Fendi.

“These are cheesy ballads but they are so good, and then the dance music in the Nineties had these big divas singing their souls out on house beats,” she says. “My mom was very into that, so even though I was a baby in the early Nineties, they kind of lived on in my house forever.”

Kiesza’s love for the era transitioned into her clothing, but did not stop there. “I am very experimental with fashion for sure. If I have an idea of something that I want and I can’t find it, I will just sketch it out and have it made, so that’s what I have been doing lately,” she says.

Her own fashion line is called SteamPop and she describes it as an affordable “fusion of different styles” that is slated to launch by yearend, citing Audrey Hepburn, Madonna, Nicole Kidman and Aaliyah among her favorite style icons. “Even Michael Jackson inspired some of the things I wear,” she adds.

Fendi tapped her for a promotional video for its Color Block eyewear, in which she walks on a treadmill against a painted skyline, singing and playing with her specs.

“I always try as many things as I can until I find something that works, which is kind of my personality,” she says.

When a knee injury dashed her classical dance hopes, she took up sailing, “moving from small boats to tall ships,” where “people would bring guitars and start jamming,” she says. That was how she learned to play herself and discovered what she describes as a natural “instinct” for songwriting. At the age of 16, she joined the Royal Canadian Navy. “It was too rigid, no flexibility, no creativity, so I didn’t last very long, and then I went to music school,” Keisza says.

Focusing first on writing for others, including Kylie Minogue and Rihanna, her own solo career came about organically. “I didn’t want to pressure myself. I knew when the right song came, I would take it from there. Eventually I wrote ‘Hideaway’ and instantly I knew: this is me,” she says. “It took a while to get to there but I’m so happy that I put it out first.”

The affable singer can be seen at many of this summer’s major music festivals, including Glastonbury and Lovebox, while a new album is due to hit stores by September. She teased the new material at the Club Costes by Albane at a party for her partnership with Fendi.

“It’s very soulful,” she explains. “It explores different styles and tempos and pays homage to the Nineties. There is some R&B-leaning tracks, some break beats, a big ballad and also dance music.”