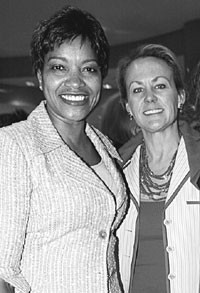 NEW YORK — “I always wanted to be a ballerina,” enthused Muffie Potter Aston, who stopped just short of a twirl at a lunch at Saks Fifth Avenue last Wednesday that featured a fashion show by Carolina Herrera and benefited the American Ballet Theatre’s Costume Fund. “But I had to settle for a tutu instead.” The lithe dancers in attendance didn’t stop Grace Hightower, Jamee and Samantha Gregory and Phyllis George from digging into their artichoke salads. Besides, Aston said she has a few diet secrets up her sleeve. “I always drink a glass of skim milk before I go to a party,” Aston explained. “And if I’m hungry when I get home I’ll have another glass.”

The requested attire was “kissable” at the Nina Ricci-sponsored benefit for The Society of Memorial Sloan-Kettering the next evening at the Mandarin Oriental Hotel, and for Lars Nilsson, that meant “colorful” gowns in yellow, peach and orange. Though Dayssi Olarte de Kanavos said she heeded the invitation by wearing lip gloss, other guests took the suggestion very seriously. “Kissable means you better look damn good if I’m going to kiss you,” said Alexandra Lind-Rose with gusto. By night’s end, she was seen kissing no one.

Besides casino tables, Anne Grauso and her fellow co-chairs, including Eugenie Niven and Hilary Dick, organized a kissing booth where attendees could smooch an Elite model. The ladies took to the floor to sell kisses at five dollars a pop.

“Who wants to buy a kiss?” Grauso asked her table.

“I’m still paying for your kisses,” her husband, Mario>, retorted.