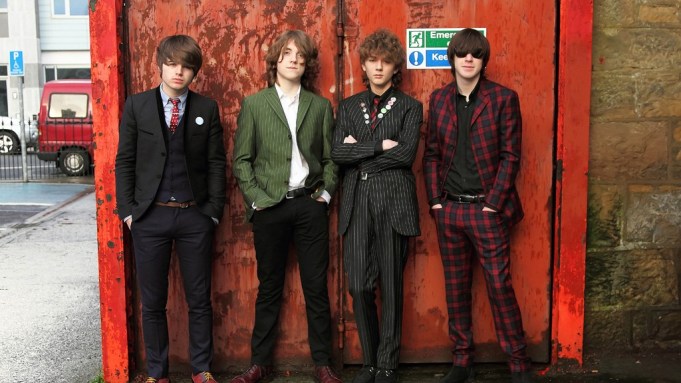 They’re in their teens. They’re adorable. And they make young girls swoon.

No, they’re not The Wanted or One Direction, they are The Strypes, a quartet of Irish teenagers that’s hoping to do for rock ’n’ roll what their fellow boy-banders did for pop.

There’s Ross Farrelly, the youngest in the band at 16. He’s the lead vocalist who also dabbles with the harmonica. There’s a pair of 17-year-olds, drummer Evan Walsh and Pete O’Hanlon on the bass, and then there’s Josh McClorey, lead guitarist and, at 18, the most senior member of the crew.

Next week, The Strypes are putting out the four-song “Blue Collar Jane EP,” which will be followed by their first Stateside tour along with an appearance on “Conan.” It’s a short tour, but includes cred-building stops at Los Angeles’ Troubadour, New York’s Webster Hall — both shows are already sold out — and San Francisco’s Brick & Mortar. “I’d never thought we’d even have fans in America,” Farrelly said. “Apparently we have a few.” In March they will release their debut album “Snapshot” in America — it was released overseas in the fall — and they will embark on another tour that includes an appearance at the South by Southwest festival.

It’ll be the first time in the U.S. for all of them.

“I haven’t really got my head around it. It still feels like I’m not going. I never thought in my whole life that I’d be in America, it seems like a different world because I only see it on telly,” Farrelly said.

The singer was speaking from Cavan, Ireland, where the boys met and grew up. They still rehearse in Walsh’s boyhood bedroom, just as they have since they started making music together in 2011 — Walsh, O’Hanlon and McClorey have been playing together since 2008; Farrelly joined them later, just after turning 13.

The Strypes, whose songs channel some of their favorite bands, staples of Sixties British blues and Seventies pub rock like Dr. Feelgood and The Yardbirds, were noticed in April 2012, when they released a self-produced covers EP, “Young, Gifted & Blue,” which reached the top of Ireland’s iTunes blues chart. Soon after, Elton John heard about them and, without even meeting them, signed them to his management company, Rocket Music Entertainment Group. “The first time we properly met him was when he came to a gig in Brighton. It was a really small pub that had the capacity of like 70 people,” Farrelly recalled. John arrived by helicopter. “It’s a bit weird when you’re singing and you look across the crowd and see Elton’s head in the background.”

Things picked up speed quickly after that. After getting signed to Mercury Records in December 2012, they released three singles in quick succession. In June 2013, David Furnish, John’s partner, had them perform at his home to toast the start of the London Collections: Men shows. Dave Grohl and Noel Gallagher are also fans. In August, Harley-Davidson chose their cover of “Come Together” for a new ad campaign. When “Snapshot” was finally released in September, it reached No. 5 on the U.K. albums chart. Shortly after, they opened for the critically acclaimed indie rock band Arctic Monkeys on their European tour.

As they prepare for their first American tour, and mature, they’re also taking a hard look at their sartorial choices.

Farrelly, who just turned 16 the month the group’s debut was released, has already created a signature look — wearing Ray Bans on stage.

“We dress smart all the time wherever we are really,” he said. The singer understands the value of a strong aesthetic. “It’s very important, not just the audio of the live performances, but the visual aspect as well, where even before you pick up an instrument, you make an impact on the crowd.”