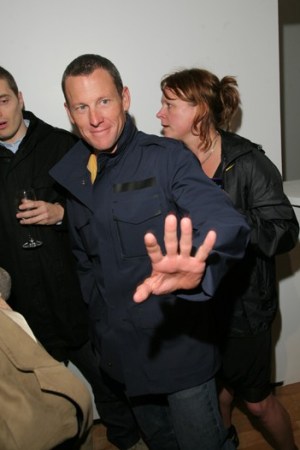 Click here for exclusive video from the Stages opening>>

Ed Ruscha contributed a goldenrod painting that read “Vital to the Core” and Tom Sachs pimped out a cruiser bike with bottles of Cuervo and called it “Lance’s Tequila Bike for Girls.” It turns out the cyclist is an avid contemporary collector (or so says gallery owner Jeffrey Deitch, since Armstrong declined to talk about the show or his charity). “He has works by a number of these artists,” Deitch said. “There is a parallel between what he does and what artists do, pushing themselves to the limit and surpassing themselves.”

Deitch was pleased with the magnitude of the works on display, some of which were valued at $700,000. “There is no group more generous than artists,” he said. “It’s the nature of what they do, they share their work with the public. I see this as the start of something important.”