The “Orange Is the New Black” actress said she buckled with tears as she recalled the high points of the past six months. 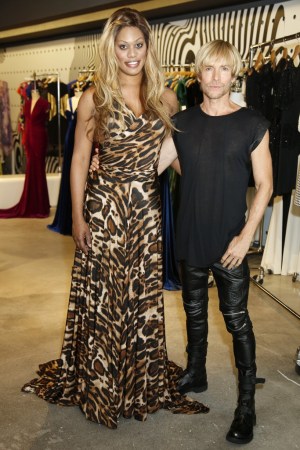 NEW YORK — Laverne Cox lost it, but in a good way, during a recent fitting for her Emmy Awards dress at Marc Bouwer’s Meatpacking District pop-up store.

The “Orange Is the New Black” actress said she buckled with tears as she recalled the high points of the past six months. Aside from being the first openly transgender actress to become an Emmy nominee, Cox also became the first one to land a Time magazine cover, which she did in June. While trying on a body-hugging leopard-printed gown and an Yves Klein blue velvet one, Cox chatted about how her adolescent thrift shop finds helped define her individualism and at times controversial opinions.

This story first appeared in the August 21, 2014 issue of WWD. Subscribe Today.

The Mobile-born 30-year-old has abandoned the black velvet culottes, vintage smoking jackets and other vintage favorites she lived in before enrolling in Marymount Manhattan College and later spending a few semesters at the Fashion Institute of Technology. “For my high school graduation, I wore a zebra robe and a pillbox hat,” Cox said. “Running around Alabama in a zebra robe and a turban, I got bullied a lot. It was rough. When kids would bully me, I would say, ‘One day I will be rich and famous and I’ll show you.’ And that’s what got me through my childhood. It’s a crazy thing to think back on now.”

Even more so when one considers that Cox will be a “Project Runway” guest judge this fall and sit in the front row at some of the shows during New York Fashion Week. Cox is the executive producer and narrator of “Trans Teen,” an MTV documentary that will be simulcast on Logo in October. She is also at work on the Jac Gares-directed documentary “Free CeCe,” based on CeCe McDonald, an African-American transgender woman who served 19 months of a 41-month sentence in a men’s facility for what Cox described as “defending herself against a racist and transphobic attack.” Cox’s own memoir is due out next week from Harlequin.

She also hosts Webisodes of the Revlon-backed “Go Bold,” which has featured Joanna Coles, Patricia Field, Kelly Cutrone and Heather Thomson. And she and her twin brother M. Lamar, an artist and musician, will discuss “Surveillance, Punishment and the Black Psyche” at Baruch College next month.

(Bouwer, meanwhile, has his own movie role in an upcoming film he declined to disclose. He also is extending his exclusive label at Anthropologie into bridal and launching another label on ShopHQ.)

But back to Cox. “My identity has always been sort of politicized, because I grew up in the South and my mother grew up in the segregated South. There’s just this history of racial suppression and discrimination. I honestly just speak out about what matters to me. That’s really all that I’m doing. I do think that being honest and truthful about how I see the world is kind of my responsibility, if I’m going to be a public figure,” she said. “Just being famous to wear beautiful dresses — and I do love wearing Marc Bouwer, this is good…but maybe if I can change somebody’s life by speaking out or just living authentically, then that is an even better reason to be famous.”

In the wake of the police shooting of an unarmed black man, Michael Brown, in Ferguson, Mo., and the subsequent demonstrations and riots there, Cox said, “I hope we find some semblance of justice because far too often when black folks are lost in this way, we don’t find justice in this world. We have not found justice for Islan [Nettles who died a year ago from complications of an unsolved beating]. I think my job is to remind people that transgender women are being murdered too and being discriminated against like [the activist] Monica Jones in Phoenix does.” She paused, then said, “This makes me really sad — let’s talk about dresses.”

Although Cox left last weekend’s Creative Arts Emmy Awards empty-handed, she hasn’t lost hope for Monday’s Emmy awards. “My Emmy speech in my shower is fantastic, so maybe the world will get to hear it someday,” she said.