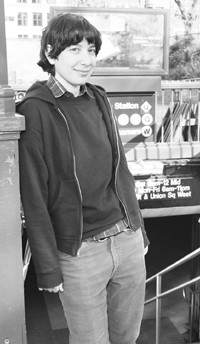 NEW YORK — For as long as she can remember, Ariel Schrag has been drawing comics.

In the third grade, she created “Life With Lucy Hound,” about a girl whose only wish is for a dog; on the day she gets one, her dad becomes a millionaire. In the eighth grade, she wrote a comic about her family, which mostly dealt with her sister bugging her. “It was very ‘For Better or Worse,’” Schrag recalls over breakfast at Coffee Shop in Union Square.

But then she discovered a comic book by Ariel Bordeaux that chronicled the artist’s life as a waitress. “It was dirty and raunchy and disgusting and amazing,” Schrag says. “That’s when I realized I didn’t have to imitate ‘For Better or Worse’ anymore.” Schrag, who recently graduated from Columbia University, started writing autobiographical comic books that told the story of her high school years.

“You change more in the four years of high school than anytime else, except maybe in your first four years,” Schrag says. “You’re changing physically and whatever is happening around you changes from one month to the next. You can even see that evolution in my drawing style from ninth grade to senior year.”

Schrag, now 23, has published three full volumes: “Awkward” examines her freshman year, in particular an obsession with the actress Juliette Lewis and the film “Natural Born Killers”; in 10th grade’s “Definition,” Schrag begins to come out of the closet as a lesbian, which 11th grade’s “Potential” further explores; 12th grade’s “Likewise,” which Schrag is still inking, focuses on the college application process.

The form has its drawbacks. For one, it’s difficult to edit, and it takes a long time to complete. “‘Likewise’ is 378 pages. I’ve been inking for four years and I’m only on page 130,” Schrag says. But at the same time, comics “really get what I’m trying to say across,” she adds. “It’s graphic, so the emotion is more immediate.” She realized that comics had that impact when she read Art Spiegelman’s “Maus” series, about the Holocaust, in elementary school.

“The father takes out the comic he drew when he was in his 20s. It’s like a woodcut, and all of a sudden you’re in that comic strip,” Schrag goes on. “That contrast immediately takes you into two different worlds.”

In the last year, perhaps owing to the success of another autobiographical comic movie “American Splendor,” Killer Films bought “Potential” to turn into a feature film, which has enabled Schrag to experiment with another form: a screenplay, which Killer asked Schrag to tackle. “Comics are such a solitary obsession, but now so many people are involved — producers, actors and actresses,” Schrag says, a bit nervously. Turning the comic into a live-action movie has forced her to think about which 10th grade moments she’ll keep and which she’ll excise. “I’m kind of reevaluating the whole year. But I’m not supposed to talk about the screenplay. You’re just supposed to keep your movie to yourself.”

Besides finishing up “Likewise,” Schrag also volunteers at a Y in Williamsburg in Brooklyn teaching comics. She has no immediate plans to write a comic about Columbia University or the year she took off after high school, which sounds even more ripe for a memoir. “I lived in this flooding basement in Brooklyn and just tried out every job,” she says. “I worked in a comic book store, at Film Forum, at A Different Light Book Store, at the St. Mark’s Book Shop, as a phone sex operator, at the Oxford Publishing House — all in the span of eight months.”

Though she describes her four years at Columbia as “a crazy utopia,” Schrag doesn’t see them as life-altering. “College was just a lot of writing essays about Hegel,” she says.