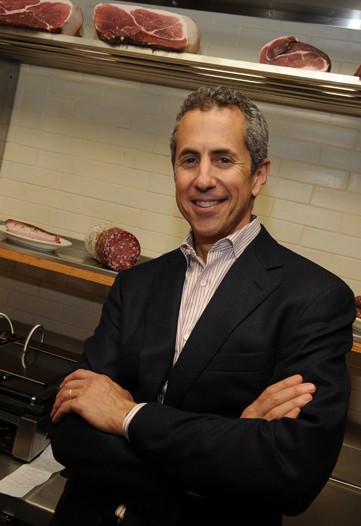 If Danny Meyer hadn’t gone into restaurants, he probably could have been a community organizer.

Over the last 24 years, the tall, lean chef has built an empire of popular, high-end neighborhood eateries. His first was Union Square Cafe in 1985, followed by Gramercy Tavern and Eleven Madison Park. Even Shake Shack, his version of a fast food burger joint in Madison Square Park, became a kind of community, with regulars swapping tips on what to order and monitoring the line via Webcam.

Meyer’s latest endeavor, Maialino, is no different. Inspired by traditional Roman trattorias, the restaurant has taken over the space formerly occupied by Wakiya in the Gramercy Park Hotel. But where Wakiya shut the neighborhood out — literally, by covering all the windows — Maialino aims to draw the neighborhood in. For starters, those old curtains are off. The windows now are adorned with wrought iron that mimics the gates of Gramercy Park, allowing dining customers to look out to the trees and passersby to look in on the action.

Meyer also recently hosted a benefit for the Gramercy Park Block Association at Maialino. The party seems to have done the trick in terms of ingratiating the chef to his neighbors. On the restaurant’s second day of business, a young mom wanders in with her grade-school daughter, also dressed casually. The staff is still prepping for evening service, but that doesn’t seem to bother them.

Meyer greets the pair. “Hey, all right, how are you? Nice to see you. How does it look since you last saw it?”

“It looks great,” says the woman. “I came last night around 10. We ate right there,” she says, motioning to a corner table. “There was a cheese on your cheese selection that was out of this world. And the fried artichokes were incredible.”

“We’re going to have good hot chocolate, too,” Meyer says to the daughter, who smiles. The two then walk arm in arm touring the space.

“This is what I mean,” Meyer says. “They live on the park, and this is her place. She’s showing it to her daughter as if she owns it. That’s what we go for — shared ownership.”

Meyer runs every aspect of his business that way. He decided to do the restaurant, he says, partly because the time was right to promote staff. “We hadn’t opened a restaurant in five years, since The Modern. So there was a backlog of really talented people on our various teams who were ready to grow.” Nick Anderer, former number two at Gramercy Tavern, is chef.

Anderer, Meyer and his business partner, Michael Romano, visited Rome in the summer to home in on the style of food they wanted to present at Maialino. “Every day we went out for two lunches, two dinners, five coffees, three gelatos, three porchettas,” Meyer recalls. “We debated each dish until we got to the benchmark of all the classic dishes.”

The result is a menu that derives from four Roman neighborhoods: Testaccio, for offal and guanciale dishes; the Jewish ghetto, for fish, lamb, fried vegetables and artichokes; Testavere, for tripe and snack food, and Campo dei Fiori, for fresh, local produce.

New York is nothing if not teeming with Italian restaurants, and Meyer knows he’s not breaking the mold with Maialino. He only hopes he is perfecting it. “You start off with the same items,” he says, “so what distinguishes one [restaurant] from the other is its relationship to its community. It’s liberating to not have to think about, ‘Couldn’t we come up with some great extra thing to make this carbonara new?’ No, let’s just make it really good.”

That said, it takes more than good spaghetti to stay in business these days. Meyer credits his viability to the success of his affordable restaurants, Shake Shack and Blue Smoke, as well as his private catering business, Hudson Yards. Eventually he will be responsible for repurposing the Gramercy Park Hotel’s Private Roof Club and Garden into a full-service restaurant.

So maybe success can be as simple as good spaghetti or a great hamburger. As Meyer sees it, “The worse things are out in the real world, the more people need a hug. And that’s our job, just as much as filling your belly is — giving you a hug.”