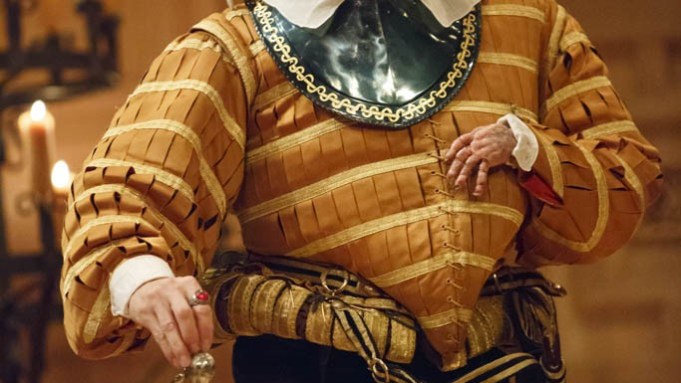 New York is known as a tough town for theater, with good reason. But it hasn’t been for the exuberant, all-male Shakespeare’s Globe repertory productions of William Shakespeare’s “Twelfth Night” and “Richard III,” playing in a limited run — which ends on Feb. 16 — at Manhattan’s Belasco Theatre. They have been greeted with enthusiastic reviews and standing ovations. The plays are directed by Tim Carroll, star Mark Rylance as Olivia in the comedy and the titular king in the tragedy; Stephen Fry, making his Broadway debut as Malvolio in “Twelfth Night,” and Samuel Barnett as, respectively, Viola and Queen Elizabeth. The costumes are designed by Jenny Tiramani, who is known for her painstakingly created, historically accurate looks that are built, in this instance, using the techniques of Shakespeare’s day. As at the original Globe, the audience begins to arrive before the action starts, and can observe the principals being dressed and made up; some spectators also sit in specially created seats on the stage.

Boys in women’s roles, of course, were a convention of the Elizabethan and Jacobean periods, since it was thought unseemly for a woman to appear on the boards. “I forget I’m dressing a man,” Tiramani says of costuming her actors. “The period shape of the clothes have so much structure to them; the frames underneath the women’s skirts make shapes for you. You can change the person into the shape you want them to be. That’s quite helpful in changing the character into a woman. This heightened style is quite fun to do, and I’ve got quite a lot of tools in my toolbox to use for the guys.” The costumes are hand-sewn, using only materials available in the period, which include silk, wool, leather and linen.

The idea, Tiramani says, is to present the plays as if they were fresh and being performed for the first time. “There’s essentially a 10-year time difference between the two plays,” she says. “If I’m imagining the first time doing “Richard III” in the mid-1590s, I tried to imagine it being done in modern dress fashion [of the day]. The higher class of characters are more fashionably dressed, more up-to-date for 1594 or 1595. The first recorded performance of “Twelfth Night” took place in 1604 or 1605.”

The other difference between the two plays, she points out, “is that ‘Richard III’ is an English history play, whereas ‘Twelfth Night’ is set in Illyria, on one side or the other of Italy. So I did try to give that a more Italianate flavor.” Olivia, for instance, is wearing a Spanish style of gown that would have been popular with a woman of her class in that time. One of Tiramani’s principles of costume design is to use “the right clothes on the right characters, which reflect their status as a person.”

Tiramani worked with Rylance, regarded as the best English stage actor of his generation by many, when she was director of theater design at Shakespeare’s Globe Theatre in London from 1997 to 2005 and he was its artistic director.

“The first time I worked with him, I made him a dress, a blue Fifties dress,” the costumer says, referring to a production early in both their careers. “I love the freshness he brings to a character, and often this has been with Tim Carroll, who has directed the shows. I love those first moments of wondering, ‘Where are we going to go with this adventure?’ — it’s just sort of a marvelous adventure. Somehow it always feels like you’ve just got the play from Shakespeare.”

Each lead actor took a different approach to the matter of cross-dressing. Tiramani describes Fry as having “such an encyclopedic interest in everything in the world [that I] looked forward to every fitting and discussed the minute details. He already knew a lot about it.” She adds, “Other actors in the company say, ‘Jenny, just dress me.’” Barnett, she notes, does not like to be too tightly laced.

“I was delighted by the lack of cynicism of the American press and American audiences,” she says, adding that “audiences in New York just seem to approach [Shakespeare] in a much fresher way.…I really worry that one night nobody will stand every single performance of both plays.”

Tiramani, whose holiday project was doing the costumes for the pantomime “Dick Whittington” at the Theatre Royal Stratford East, has another major interest. She has been working to continue the work of Janet Arnold, a prominent expert on historical costume who died in 1998, and to that end, she and several of Arnold’s other colleagues and friends have set up The School of Historical Dress and worked to finish Arnold’s interrupted projects, which include several books of historic patterns. “It’s really lovely to start a little school, but it is quite exhausting,” she says. Courses are already under way, and they have attracted a wide variety of students, from people who work as reenactors to graduate students doing Ph.D.’s on aspects of 17th-century dress. “We’re really a baby school,” Tiramani says. “I’ve never tried to raise money for anything, so I’ve got a big hill to climb.”