As research for her latest tome, the author spent a year traveling around the country visiting the wives and delving through closets and photo albums. 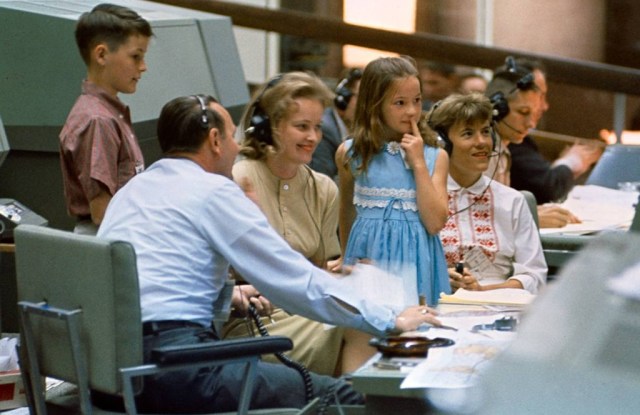 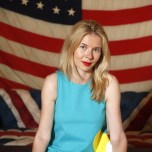 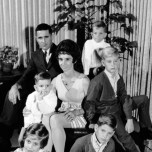 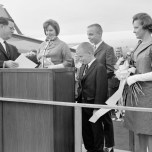 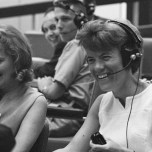 “Second books are notoriously hard to figure out,” Koppel says of the tome’s inception. (Her first foray into publishing was 2008’s “The Red Leather Diary,” also nonfiction.) “I had been working on a novel that was going OK, and my husband Tom [Folsom, the author of ‘Hopper,’ a biography of Dennis Hopper] had ‘MoonFire; The Epic Journey of Apollo 11,’ this big rerelease of a Norman Mailer book through pictures, and I just saw this image that blew me away.”

It was the Astronaut Wives, seven women posed in varying shades of sherbet-colored shirtdresses (bar one rose-patterned shift) with hair carefully curled in the Fifties style known as a “full set,” resting their palms lightly against the ochre-colored Mercury spacecraft that would eventually orbit Earth containing John Glenn as if it were a parade float. That picture is now the cover of Koppel’s book. “I read that they raised their kids in the ‘Space Burbs’ in this fake town called ‘Togethersville,’” — here the author’s eyebrows peak, as if to say, “You can’t make this stuff up” — “having every moment of their lives photographed for Life magazine, who offered them a collective $500,000 for the exclusive on their ‘personal stories,’” a not-insignificant amount considering a military salary at that time was something like $7,000 a year, “and they became these sort of proto-reality stars, with these ghostwritten features ‘by the wives’ appearing in Life, and this constant journalist presence in their homes, these staged family photo shoots.…I couldn’t get it out of my head. I looked into it, and sure enough, they’re all still alive, and they still get together. Most of them are in their 70s and 80s, and I think their feeling was sort of, ‘If we don’t tell our side of the story now…we’re not going to be able to.’”

Koppel spent the following year traveling around the country to visit the wives and delve through closets, photo albums and the occasional divorce filing (“out of the Mercury Seven, the New Nine and the ‘Fourteen space families,’” Koppel’s book reads, “only seven couples would stay together”).

“Life is absolutely stranger than fiction,” Koppel says of the meetings that took place and the book born from them, “and that’s the best part about writing nonfiction, finding what you think feel like fictional moments, but they’re true.…I love Apollo 8. That’s my favorite mission: Christmas Eve, 1968, the first time we go around the moon. It’s just so incredibly dramatic, the guy’s reading Genesis — and now in our very secular world, that seems so odd, and yet it seems so perfect — Marilyn Lovell on Christmas Day opens the door and it’s a mink coat and it’s got this card [from Jim Lovell]: “To Marilyn, from the Man in the Moon.’ One day humanity takes off to the stars and yet here are these incredibly human, ‘down-to-earth’ moments.”

“This was just such an immense opportunity,” Koppel says of her subjects’ willingness to submit themselves for consumption by the general public, “and this was how you made it in the world, on your husband’s coattails, getting in the public eye and changing your destiny. Being a military wife was a pretty desolate life: living in these desert spaces, raising your kids, no one is paying attention to you, your husband likely to die in some horrible crash, and then all of a sudden, two years later, Pucci is calling you to help you decide what to wear for the Apollo 12 launch, you’re having tea with Jackie Kennedy at The White House. Your lipstick color is spawning debates and trends. You’re hosting these launch parties and sneaking out into your suburban backyard to look up at the moon and think ‘My husband is up there.’ Jane Conrad said she always felt like ‘Maybe this is what it’s like to be on LSD,’ trying to hold it together while having this ‘macro/micro/he’s up there/I’m here,’ just trying to make sense of the whole surreal situation.”

It wasn’t easy. “The astronauts really became rock stars overnight,” Koppel said. “Even now, I’m finding all these groups of teenagers online who are obsessed with astronaut style, their Lacoste outfits, the boys’ club mentality of cigarettes and floating around the pool at the Holiday Inn, slapping each other’s backs.…[The astronauts are] these very meat-and-potatoes guys, and there’s definitely something sexy about an astronaut, you’re supposed to be this perfect human specimen, but there’s this mysticism to them, too, talking about being out in space and holding your thumb up and blotting out the entire earth and everyone you know and love.…Most of these women, their husbands were gone for about a decade on this endeavor, and they think that once they’re back things will be normal,” but reentry proved difficult, which brought with it a different type of marital strain. Koppel summarized Buzz Aldrin’s notoriously earth-provoked ennui; “I think Buzz just hated not having a mission, that he felt, ‘How do you top what I’ve just done? Things will never be normal. I’ve been to the moon.’”

Koppel’s book is full of a certain sense of myopic nostalgia familiar to “Mad Men” aficionados and totally foreign to Sheryl Sandberg’s principles as espoused in “Lean In.” “There’s this very Fifties model of the housewife that’s even more pronounced in the astronaut world,” Koppel says, “with such a pressure for them to act perfectly: the Stepford Wife, perfect American wife, perfect Astronaut wife, ‘half of the p.r. effort against the Russians.’” The world of the book is one filled with wives who turn a blind eye to infidelity (which ran rampant among the internationally adulation-soaked American Hero Astronauts, famously sought after by fan-girls dubbed “Cape Cookies”), who exist solely to support their husbands with a shared motto of “happy, proud and thrilled” and jokes of garnering a “PHT,” or “Putting Hubby Through” degree in lieu of more traditional educational awards.

For the most part, Koppel notes, the astronauts were ready to try their hands at playing supporting characters in her book. “I think they think the wives are pretty amazing,” she says. “They really considered them to be handling the public relations, this very demanding, massive job, with these impromptu press conferences on their front lawns. The whole joke is that these guys are engineers and not so good with putting feelings into words, and they’ve returned from the moon and all the press wants to know ‘What did it feel like?’ ‘How did it look?’ ‘What did it smell like?’ And they’d be spouting off vectors and numbers and the reporters would just huff and say, ‘Forget it. I’m going to go talk to your wife.’”