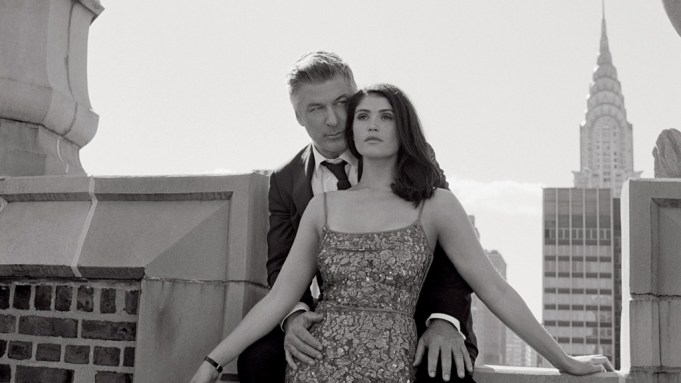 Photographer Mary McCartney has shot the fifth edition of the Zeiss Art Calendar, which she did with Alec Baldwin and Gemma Arterton posing together at New York landmarks. Called “Moments in the City,” it is being distributed to clients of Zeiss, which makes a variety of camera lenses, this month.

“I had just worked with Gemma Arterton on another project, and she’s full of life and really bubbly; really good fun,” says McCartney, who cast the two performers in their roles. “Alec is very New York. He’s very New York, and she’s very British.

“You don’t know exactly what their relationship is, or connect them too much as a couple,” she adds of the duo they portray in the photos, which were shot using black-and-white film, rather than digitally. “It leaves a little bit more to the imagination.” Her aim, she explains, is to have the calendar shots look “like stills from a film.” Arterton is known for her roles in such movies as the James Bond thriller “Quantum of Solace” from 2008 and “Clash of the Titans” from 2010, along with the 2008 miniseries “Tess of the d’Urbervilles.”

McCartney is a daughter of Sir Paul McCartney and his first wife, the late Linda Eastman McCartney. Linda was an accomplished photographer, known for her portraits of music gods and goddesses — among them Jimi Hendrix, Grace Slick, Janis Joplin, The Animals and The Doors — and intimate shots of her immediate family. She was also the first woman to shoot a cover for Rolling Stone magazine. Her daughter’s portrait subjects have included Ralph Fiennes; Jude Law; Tony and Cherie Blair’s fourth child, Leo; her younger sister, designer Stella McCartney, and artist Sam Taylor-Wood, whom she shot disguised as Frida Kahlo for a show at the The Lowry in Manchester, England, earlier this year.

“She was really talented, but when we were kids, we were kind of dismissive about it,” says Mary of her mother’s work. When Mary was older, however, her mother “inspired me,” she explains. “It was going through her contacts when I was a picture editor that made me want to be a photographer.”

Her mother, who died of breast cancer at age 56 in 1998, lived long enough to see her second daughter, born in 1969, take up her profession. “She used to phone me and check how the pictures had gone,” Mary recalls. “She’d ask, ‘Have you got your contact sheets yet?’” The photos she took of Linda three weeks before she died are among her best-known, and Mary became a breast cancer activist.

Settings for the Zeiss calendar include The High Line, the Metropolitan Museum of Art, Tudor City, the Empire State Building and the Lexington Candy Shop Luncheonette, which was founded in 1925 at 83rd and Lexington Avenue. The last was one of her mother’s haunts. “That’s the diner opposite where she lived, and where she liked to go before she married my dad,” McCartney says.

Of her own work, she says, “Basically, I’m always shooting. I love always shooting. I have quite a large archive. The weakness is that I’ve only done one book so far in my career — which is ridiculous.” And not entirely true. In 2010, Mary put together “From Where I Stand,” a compilation of photos from her archives. She has also published a limited-edition coffee-table book for a project in which she teamed with the cell phone maker Vertu and the cleft-palate charity Smile Train, and a vegetarian cookbook called “Food,” both in 2012. In 2001, she made a film called “Wingspan” about her father’s second successful band, Wings, which he put together after the Beatles broke up, and which also featured her mother. Mary and her siblings had grown up touring with the band. Her first public photography show, which ran in 2004, was called “Off Pointe: A Photographic Study of The Royal Ballet After Hours.” She currently runs the photo department at her father’s holding company, MPL Communications.

The Zeiss calendar was shot in a single day to accommodate Baldwin’s schedule. The actor, of course, is no stranger to controversy, and he ignited a new one in mid-November when he allegedly lashed out at a paparazzo with anti-gay slurs. This incident and some subsequent impolitic remarks — along with low ratings — caused MSNBC, which produced his TV talk show “Up Late,” to suspend him, then drop his program. The actor has already secured a new TV gig, and will be hosting TCM’s “Private Screenings” series beginning Jan. 6.

Asked about this, McCartney responds, “I haven’t actually looked it up online, so I don’t really feel like I can comment on it. Alec is a really interesting person; so bright and complicated. He’s very passionate, and I kind of like the way he hasn’t changed himself. He’s not kind of ‘media cleaned,’ saying all the right things, and he’s New York. I think he just doesn’t take it well where you are well-known and living in the city [and being stalked by photographers]. Don’t you feel that you would kind of hope that if someone knows that it upsets him that they would kind of back off a little bit?”