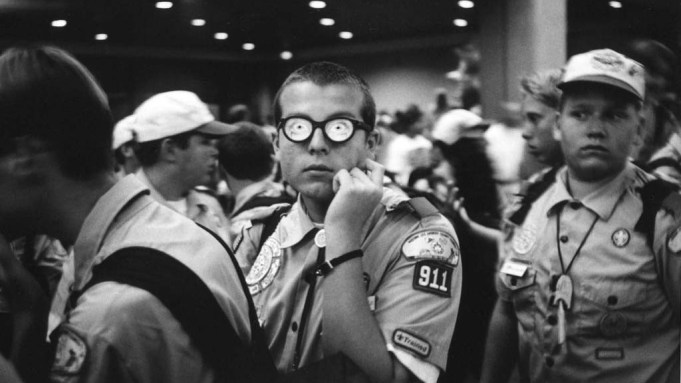 BOSTON — Throat cancer stole his ability to speak, but Mike Toth nonetheless has a powerful voice.

On Sunday night, the renowned brand developer stood surrounded by family and industry friends at a party celebrating the launch of his photography book, “US: American Stories.” Behind him was a backdrop of images he shot during ad campaigns he created for Wrangler, Coach, Ralph Lauren and others. At these shoots, Toth would let the professionals do their jobs, while quietly looking for “backstage” moments to capture. Often, he’d send the photo, with an observation scrawled across it in silver ink, to his clients as a memento.

For instance, there’s a picture of a skinny little girl flexing her muscles in an oversize Wonder Woman costume. Toth had noticed the girl lingering wistfully around the margins of a Taylor Swift/Keds shoot and sent an assistant to get a costume. There’s also a candid moment from a Tommy Hilfiger shoot — figures diving off a wooden raft into a lake, caught at the moment everyone’s toes are in the air.

“We were at Moosehead Lake [in Maine], unbearably hot that day,” Toth recalled, communicating by silently mouthing words. He signs letters or writes a comment when he hits a comprehension snag. “They stripped off the minute the shoot was finished. That one is [‘Sex and the City’ actor] Jason Lewis.”

In his 30-plus-year career, Toth has worked with a who’s who of American brands, from Wrangler to Ralph Lauren, Timex and Hilfiger to J. Crew (which, before he got involved, was named Popular Club Plan).

“His work speaks for itself,” said Keds president Rick Blackshaw, who has worked with Toth for 18 months on Keds’ “Brave Life” campaign featuring Swift. “We’ll be in a meeting where everyone is shouting over one another, and Mike will quietly raise his hand. And everybody tunes in.”

“Mike has a real understanding of the American vernacular and helped us visually articulate what we wanted to do with L.L. Bean Signature,” Carleton recalled.

The instinctive flair for Americana shows in Toth’s photos — demolition derbies, rodeos, motorbikes, couples kissing, kids with freckles and jug ears. A Boy Scout going through airport security wearing X-ray glasses has a layer of poignancy because it was shot after 9/11. And yet, like much of Toth’s work, it could plausibly belong to an earlier era.

Daughter Kezia Toth, who helped compile the book, said her father has an insatiable curiosity and a knack for connecting with strangers.

“He approaches anyone,” Kezia said, pointing to a shot of a frumpy tourist couple kissing blissfully at Mount Rushmore to celebrate their engagement. Or an image shot on the outskirts of Talladega, Ala., of girls decked out in prom dresses buying cigarettes at a filling station. “Of course, it embarrassed us as kids.”

Toth shrugged. “What’s the worst that can happen?”

When asked about brands he admires that he doesn’t work with, Toth listed men’s brands Gitman Bros., Hickey Freeman and The Alden Shoe Co. He would give any brand he works with the same advice: Be authentic.

“There are lots of brands that get caught up with the hipster-cool approach and forget who they are and want to be something different rather than celebrating who they are,” he said. “Best products are cool but also doing a great job.”