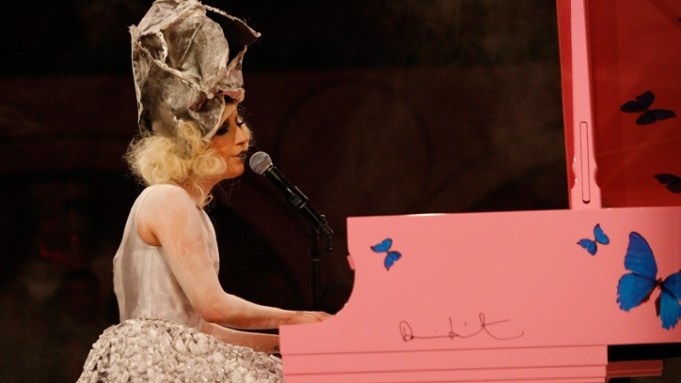 The Museum of Contemporary Art in Los Angeles pulled out all the stops for its 30th anniversary blowout bash Saturday night.

The buzz of the evening was Lady Gaga’s performance of her new ballad, “Speechless,” as part of a production masterminded by Italian artist Francesco Vezzoli. The singer played a pink piano designed by Damien Hirst and wore a towering hat created by Frank Gehry, a mask by Baz Luhrmann and Catherine Martin, and a frothy costume by Prada. She was accompanied by a performance from the Bolshoi Ballet. The piece was appropriately titled, “Ballets Russes Italian Style (The Shortest Musical You Will Never See Again),” and, together, the elements left guests overwhelmed. “It’s a triumph,” said billionaire philanthropist Eli Broad.

Still, it was the Lady herself who drew Jessica Alba, Gwen Stefani and Jenni Kayne. “My daughter is really jealous,” said Kate Beckinsale, who left her 10-year-old Lily home for date night with husband Len Wiseman.

Lady Gaga, for her part, said she was honored that Vezzoli chose to use “Speechless,” a love song written for her father. “I think it might change my career,” she said.

“It couldn’t have worked with anyone else,” said Vezzoli of his muse. “I wanted to have the Nijinsky of our day — the most courageous, the most daring.”

After helping MOCA raise nearly $4 million — including the $450,000 sale of the Hirst-designed piano to gallerist Larry Gagosian — Zoe Saldana, Pharrell Williams and Margherita Missoni trekked across town to join Tom Ford and Nicky Hilton for the after party hosted by Prism Gallery, Dasha Zhukova and Pop magazine.