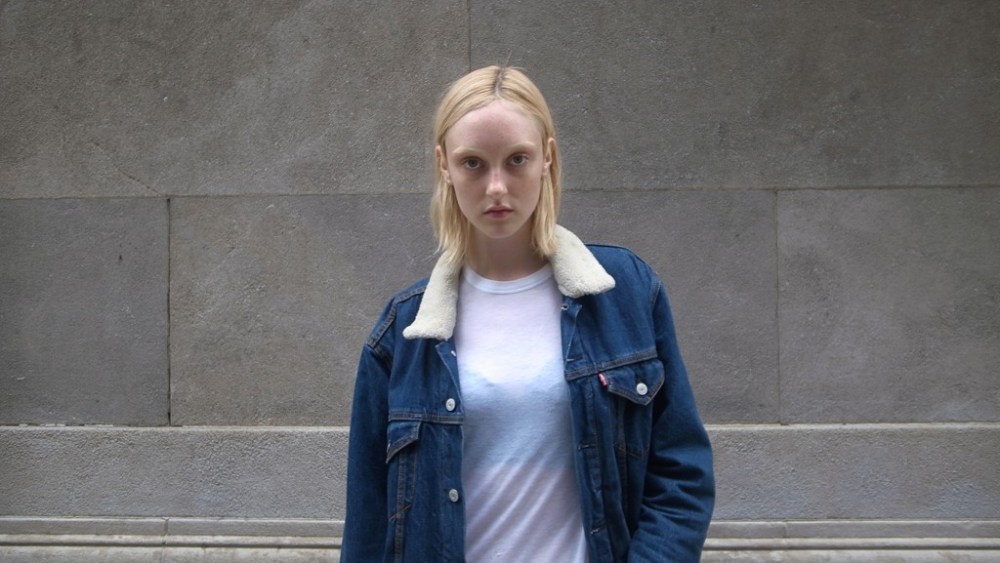 Frances Coombe’s big, round, green eyes are the focal point of her pale-skinned, freckled face. Maybe it’s because she recently had her eyebrows bleached to a barely there blonde to match her hair. “I’m pretty open to whatever they want to do to me,” she said nonchalantly. (Coombe, repped by Muse Management, spent a couple years as a fiery redhead before recently returning to her natural color.) The 21-year-old model, who is half-Scottish, half-Canadian (“My dad was adopted, so we don’t know what the other half is — we just say Canadian”), has only been in the industry for three years, but she’s fully acclimated to the ins and outs of the fashion world. During a chat with WWD, she casually referenced experts by their first names — as in Guido (Palau, the hairstylist) and Stephen (Jones, the milliner).

Though she’s been featured in Nylon, Glamour Italia, Harper’s Bazaar and Self Service, runway seems to be Coombe’s forte. She’s walked for Marc Jacobs, Dior, Oscar de la Renta, Calvin Klein, Anna Sui, Ralph Lauren, Marchesa, John Galliano and Saint Laurent, to name a few, and a close-up of Coombe walking the Armani Privé Couture runway ran on the Jan. 24 cover of WWD. This past fall season was her first stint in Milan, where she walked shows including Moschino, Alberta Ferretti, Bottega Veneta and Just Cavalli.

Here, Coombe — who, it should be noted, would look perfectly at home in the cast of a Wes Anderson movie — reflects on her most memorable runway moments, growing up in Ontario and her new bulldog, Monday.

WWD: How did you start modeling?
Frances Coombe: I was scouted in my 10th grade career class — it might be a Canadian thing. I was 16 and a scout from Elite Toronto came in to talk to us about the fashion world, what kind of jobs there are. She kind of had an eye on me the whole time. She came up to me after class and gave me her card. I went in [to the agency] but I had blonde highlights and braces at the time and they were like, “Okay, dye your hair back to its natural color and we’ll start you when your braces come off.” I started modeling part-time that summer. Then I moved to New York when I was 18.

WWD: Was it hard balancing high school with modeling?
F.C.: It was easy to balance only because my mom was so supportive. She was really into it. She teaches prenatal classes part-time now but she was a stay-at-home mom at the time, so she was able to drive me to castings and drive me back. She was totally supportive and made it happen. Even now, my mom sends me backstage photos and stuff. She’s like my p.r. woman — my “momager.” She’s on the Internet all the time, Googling me, looking at blogs, whatever. It’s really nice.

WWD: What was it like growing up in Toronto?
F.C.: It was a big city but we also lived by the water in a residential area. I danced a lot — not competitively, but I did Scottish dancing, ballet, hip-hop, jazz, modern. I played a lot of instruments, like saxophone, piano and guitar. I tried everything.

WWD: Did it ever cross your mind back then that you might become a model?
F.C.: I was always the tallest in my class. I didn’t really mind, I think it’s because I had a couple of other girls in my class who were also very tall so we kind of embraced each other. We would pose together in class pictures. I always thought I had the height to be a model, but I never really pictured myself as a model until I got scouted. Before I even wanted to model, fashion was kind of already on my radar. I’ve always loved arts. I used to dress my mom. She used to ask for my fashion advice when I was little.

WWD: You were a redhead in some of your early pictures.
F.C.: Everyone in the New York market thinks I’m a redhead because I dyed it as soon as I moved here. But I’m naturally an ashy blonde. We kind of made the decision to do something bold in the beginning. I went to Laurie Foley — she colors hair for a lot of amazing people, like Karen Elson — so she gave me this really bright orange. I’ve been dying my hair since I was young, so I’m not precious about it.

WWD: Where do you live in New York?
F.C.: I live on the Upper East Side. I know a lot of people don’t really like the area but I love it. I live with my boyfriend, Ricky Owens [a fellow model]. We just got an alapaha blue blood bulldog named Monday. They’re a very rare species of bulldog. She sort of looks like a pit bull. She weighs 65 pounds and she’s only 8 months old. It’s great living up there because there are so many dog parks by the water.

WWD: What do you like to do when you’re not working?
F.C.: [Ricky and I] are huge exercise fanatics right now. We go to the same gym and we’ll run down to the gym along the side of the water together. He used to box amateurly and there’s a boxing ring at our gym so he just started to train me. And we are huge TV people — we are watching “Game of Thrones” right now, which is superintense. And I love “Million Dollar Listing,” have you seen it? It’s about these brokers in New York selling million-dollar apartments.…I’m a huge fan of Fredrik [Eklund]. I’m a little obsessed with “Orange is the New Black,” too. Anything on HBO is always good.

WWD: You’ve walked for several runway seasons now. Is it something you look forward to?
F.C.: I wouldn’t say I look forward to it [she laughed]. It’s very rewarding after the fact, but you sort of have to brace yourself for it. Each season it gets easier and easier because you know more of what to expect, but then at the same time it’s always a different experience. The people we end up working with are so talented. And when you get to the fitting and you see the collection, it’s nice to know that we’re putting just as much work in as the designers are.

WWD: Has having access to such great fashion had any effect on your personal style?
F.C.: I think modeling has made me appreciate the quality of clothing. I’ll invest in pieces that I know will last. I sort of know what key pieces to buy. My tastes have definitely changed, even just going from age 18 to now. [Note: Coombe showed up to the office as the embodiment of off-duty-model cool in red leather pants, studded loafers, a Prada Saffiano handbag and her boyfriend’s oversize denim jacket.]

WWD: Do you ever feel a sense of competition with other models during the runway season?
F.C.: At the shows, at that point, everyone is hired, so everyone’s just doing their thing. But it’s different during the casting process. I never really had any issues with models, though. I have some model friends. I think you definitely gravitate toward people who are going through the same things as you…hence the model boyfriend [she laughed].

WWD: What’s the most challenging part of the runway season?
F.C.: I’m a homebody so I hate being away from my boyfriend and my dog. And also, I love New York. It’s hard to leave the city for a long time. But, you know, I would say the casting process is the hardest, just because you have so many appointments in one day. It’s more the physical aspect of it — you’re in a foreign country and you have to plan your day out, using the metro and a map. I’m old-school. I don’t use GPS.

WWD: What are some of your goals in modeling or otherwise?
F.C.: I love modeling. I see past it, but I am not looking for something else right now. I want to do it as long as possible and see where it takes me. I’d love to shoot more editorial — that’s my favorite. Further down the line, I would love to work in the industry. I’ve always wondered if eventually I might want to get into photography. I wonder if I’m good, I’m not even sure.

WWD: What’s on your bucket list?
F.C.: I wanna take my mom on a trip around Europe. She surprised me one season in Paris, she just showed up backstage at a show. I thought I was hallucinating. I also haven’t been to the West Coast here, so I’d love to do a road trip. I would love to take acting classes, too. That’s on my list of things to do when the time is right.