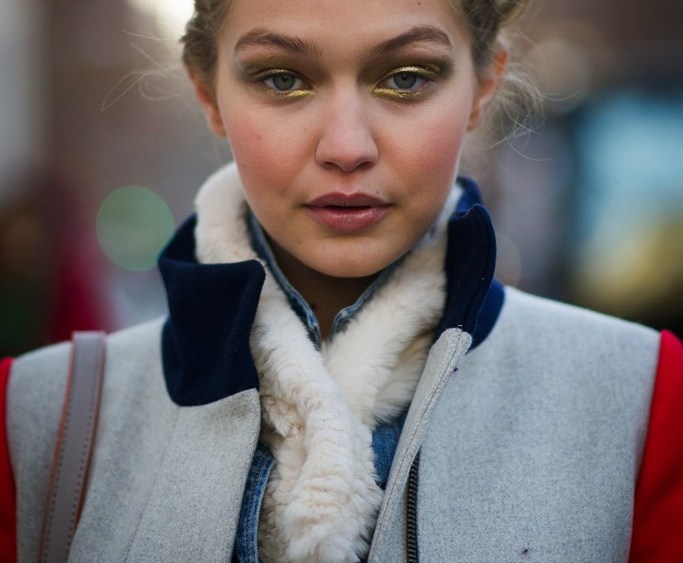 “Is this kid’s life real? I mean, it’s crazy.” Gigi Hadid is talking about Romy, the already-famous granddaughter of Carine Roitfeld — specifically the scene in 2013’s “Mademoiselle C,” when Karl Lagerfeld takes the newborn for a spin in a slick Cadillac of a black stroller. “The kid’s life is nothing short of amazing,” says Hadid.

Funny coming from the mouth of this 19-year-old, whose own life has been pretty amazing as of late. The IMG-repped Hadid is a newly minted Sports Illustrated swimsuit-issue model, appears in Tom Ford’s fall ad campaign and is Roitfeld’s latest fave, having featured on the cover of CR Fashion Book’s fourth issue. As for her personal life, that’s not too shabby either. Hadid’s on-again-off-again beau is Aussie singer Cody Simpson, and she counts Justin Bieber and the Kardashians as close friends. (On a side note, Hadid’s mother, Yolanda Foster, is a former model and stars on Bravo’s “The Real Housewives of Beverly Hills.”)

WWD recently caught up with the New York University sophomore in between takes on the annual Pirelli Calendar photo shoot. Dressed down in a white T-shirt, dark jeans and a Heidi braid, she talked about dating a heartthrob in the limelight (read: dealing with haters), being the only girl on Cody Simpson’s tour bus and modeling since infancy.

WWD: Is it true that you’ve been modeling since you were an infant?

Gigi Hadid: I was always in front of the camera. My mom was really passionate about photography — I have pictures of my whole life. I’ve always just been in front of my mom’s camera and it’s always comfortable to me. The first two years I was always on set with my mom. When I was young, I did Baby Guess and Guess Kids — Paul Marciano saw me when I was a baby and decided I was going to be his next whatever. After Guess Kids, my mom made me stop. She would not let me sign with an agency until I was 17 because she wanted me to be a normal kid and accept myself for who I was. She knew the industry was going to judge me.

WWD: How did the CR Fashion Book cover shoot with Carine Roitfeld come about?

G.H.: Stephen Gan asked IMG who he should meet for the shoot — and if he was meeting with one, who that person should be and [they] said me. Stephen was shooting and he had me meet Carine and that was it. Now, I feel like I meet with Carine every week because I feel like I have a shoot with her all the time. She really pushes me, she believes in me and we connect really well. Hopefully, my work ethic and stuff keeps me around her. I’m so grateful to have her.

WWD: What’s the best advice she’s ever given you?

G.H.: The one thing she told me that was the biggest in my mind was our third shoot together. She asked me, “Are you happy today?” and I said, “Yeah, of course, I’m so excited to be here.” She said, “OK, in this job you have to be happy all the time. You have to love what you’re doing.” I was already happy on set but it made me want to make everyone else on set happy. It really changed how I work. I’ve been OK with becoming a happy, goofy weirdo on set. I don’t know, I just, I go to set every day trying to make other people happy because of her.

WWD: You’ve worked with major photographers including Steven Meisel and Bruce Weber. What are you like on set with them?

G.H.: I try to be more goofy when I’m on set now that I’m more comfortable. In real life, I’m so goofy and super weird. I’m never mean but people don’t see the weird side of me. Like, I’ll be dancing around. My best friends will always say that they wish others saw that side of me, when I’m doing a weird dance, or weird faces or voices. I can do the best Kourtney Kardashian voice ever [changes the pitch of her voice]. “Literally, Scott you’re so disgusting, that’s psychotic. But, literally, Scott you can’t call yourself a Lord because that’s so disrespectful. My mom is part of the Catholic Church and not everyone has white Lamborghinis.” I’m friends with Kendall and Kylie and sometimes I’ll almost slip and say, “Literally Scott,” just because I always say it.

WWD: Who’s part of your inner crew these days in New York City?

G.H.: I have my hometown friends, but I have my industry friends and I have some who are in the middle, like Ireland Baldwin, which is great because she is genuinely one of my best friends. When we’re in L.A. we go to movies and hang out, but when she’s here it’s fashion week and we go to all the events together. Those are the friends I am closest with because they understand both sides of me and that’s what I really cherish in people. I keep my hometown friends close.

WWD: How did you become close with the Kardashians? Do you all hang out often?

G.H.: It’s funny because Kylie dated my ex-boyfriend. Before that, in L.A. we grew up knowing about each other but never met. Kendall and Kylie and I became friends the week before this year’s Met gala. I went to Rihanna’s party and stuff afterwards but didn’t go [to the gala].

WWD: Your social presence is growing, partly due to the fact that you’re constantly in the headlines, once even with Justin Bieber.

G.H.: Justin’s a good friend of mine, he’s awesome. I met him in Cannes. Wait, that’s a lie. We know each other through my ex-boyfriend [note: they’re now on again], who is also signed to Scooter Braun and they toured together. That’s Cody Simpson. I was on the Bieber tour for two weeks. It was crazy but so fun. I’m like one of the guys on tour, on a bus with 10 dudes. It’s gross. You have to get used to not showering. They’re like, “How do you look so glam?” I’m like, “Dry shampoo.” So I met [Bieber] a couple of times but we’re friends and everything with my ex-boyfriend is cool, and him and Justin are really close. So it’s all good. You run into all your friends at Cannes and you end up at the same parties. In that case you just end up both watching the Grand Prix race from the same boat. That’s how we ended up together.

WWD: How do you deal with social media and the many messages you receive?

G.H.: I want to go off on people on Twitter so much. There’s this one picture of a girl hugging Justin and everyone says it’s me but it’s not me — she has brown hair and she’s wearing bracelets. I wasn’t wearing any accessories. Then they go off on me. Then there are Web sites that are saying, “Justin Flirts with Gigi Topless” and then you click on the picture and it’s me and Justin sitting on opposite sides of the boat. I’m looking one way and he’s looking another and he doesn’t have a shirt on because we’re on a boat. And flirting? What part of that picture says we’re flirting? Show me one sign that we are flirting. I think you have to pick your battles.

WWD: When was the last time you picked your battle?

G.H.: Like, last week or two weeks ago. Someone tried to claim that I never loved my ex-boyfriend because I broke up with him [because I was in] Sports Illustrated. So I just said [on Twitter] that you only see just 1 percent of paparazzi shots when we’re at dinner or out — that’s 1 percent of our relationship. Like no one saw, you know, anything that’s real. I love Cody to death and he loves me. And he needed his time to focus on his music and he’s the one who broke up with me. We’re still best friends and I’ll always respect him and support his career. But it’s really hurtful when people try to do that. The most hurtful thing to me is when people try to put assumptions on me and my relationship because that is not OK. Love is something that’s really serious and private that you can’t try to claim or know.