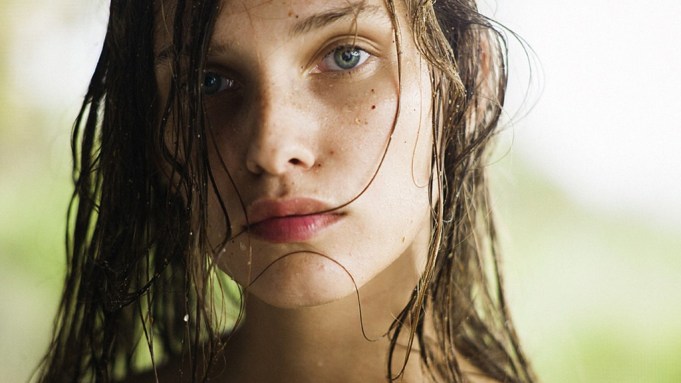 In March 2009, Kelsey Van Mook and her mother were camped out in a Paris hotel room when the 17-year-old got the call. “They were like, ‘So, you booked Givenchy. And they want you to open,’” Van Mook recalled. Up until that point, the Vancouver, British Columbia native had only walked in a few New York shows, including Charlotte Ronson, Jeremy Laing and Rachel Comey, so Givenchy was obviously a pivotal moment in her career. She nabbed the show as an exclusive — after which things snowballed. She landed the cover of Vogue Australia’s August 2009 issue, booked the campaign for Givenchy’s Dance fragrance and was a staple on the next season’s major runways, including Yves Saint Laurent, Chanel and Burberry Prorsum. Now 22, Van Mook has appeared in campaigns for DKNY, Sandro and more, as well as editorials in Vogue Japan, Vogue Italia, Elle U.K. and Elle Mexico.

Van Mook — who is a mix of Dutch, French, English and Icelandic — said it’s hard to imagine herself doing anything else. “It’s been my life for so long,” said the Next-repped model. “But I’ve always liked arty things — I still paint sometimes. I would like to learn how to take pictures one day.”

WWD: How did you start modeling?
Kelsey Van Mook: I was scouted when I was 14 at the mall, which I feel is such a common story for models. We’re always scouted at shopping malls. But I just left it for a while because I was so young. Then I came to New York and met the agency [Next], signed with them and moved out here pretty quick.

WWD: Growing up, was it ever something you thought you’d want to do?
K.V.M.: It’s kinda funny because my mom did a bit of modeling locally. She’s tall, skinny and beautiful. I saw pictures of her and I wanted to be like her. When I was little, I used to say that I wanted to be a supermodel. We would joke around about it and then it happened, so it’s kinda funny.

WWD: What was it like moving to New York from Vancouver at the age of 17?
K.V.M.: I didn’t like New York when I first moved here. It’s just so different from Vancouver. Vancouver is so green and beautiful and New York was this big, dirty city.

WWD: Five years later, you still live here, so you must’ve come around to it.
K.V.M.: I live in Brooklyn now, in Williamsburg near Bedford Avenue. I got a nice loft, but it’s kind of a crazy neighborhood. It’s more hectic than the city now. It’s so crowded. I kinda wanna move again. I used to live on Elizabeth Street [in NoLIta], which was really nice.

WWD: Has your family always been supportive of your career?
K.V.M.: I have an older sister, an older brother and a little sister. We’re a big family and we’re all really close. They’ve been supersupportive since I started. When I first moved out here, [my parents] came with me and got me an apartment so I never had to live in a model apartment. My mom still posts all my photos. She gets really proud.

WWD: You’ve been modeling for more than five years. Was there a moment when you felt like you’d really made it?
K.V.M.: Givenchy was my first big thing. That was crazy. I hadn’t done any big shows yet and it was my first time in Paris. I was just shocked. I went to the fitting and all these supermodels were there. Being in the lineup and seeing all the girls that were behind me — girls like Lily Donaldson and Adriana Lima — models that I looked up to… That was a freaky moment, but exciting.

WWD: What direction has your career taken since those early days?
K.V.M.: My career is more editorial now. Now if I do shows, I see if I can just get a few good ones. It was crazy when I was doing a lot of shows — it was like 50 per season. It’s two months of crazy. It’s really stressful. But I would like to do it again, now that I’m older and I know what to expect. I love doing the shows in Paris because they’re such big productions. It’s such a cool thing to see. When you’re doing shows, it’s hard to enjoy it because you’re so tired; you don’t even have time to think about it, whereas with editorial, it’s a nice long day — you’re in one place for eight hours. But I like both.

WWD: In terms of style, is there anything you’ve picked up on from the fashion world?
K.V.M.: It’s definitely inspiring to be around the top fashion people in the world. I’ve learned a lot, but to be honest, my mom has really good style, so I picked it up from her at a young age. She dresses better than me sometimes. She has lots of Chanel bags — she bought me these Chanel shoes [motioning to her patent-leather ankle booties].

WWD: What’s the weirdest thing you’ve had to do on a photo shoot?
K.V.M.: There’s been so many. Oh, one thing — which was weird but it was really cute, too — we were shooting at a zoo and there were all these little monkeys. They wanted the monkeys to be crawling on us in the pictures, so they didn’t feed them breakfast. They put us in a big cage with them, and then they threw peanuts on us. There were like 15 little monkeys crawling all over us. They threw peanuts on my hat and they were crawling up on my head.

WWD: What’s the best part of your job?
K.V.M.: It teaches you to grow up fast. You’re always around older people, and I’ve learned how to live on my own in different countries, which is pretty crazy, because I’ve traveled the world. At my age, I’ve been so many places and I never would’ve done that otherwise. I really liked Australia. I lived there for about a month when I shot the Vogue cover [in 2009]. It was so beautiful there. It was winter, but I was staying right on Bondi Beach.

WWD: Did you ever have insecurities that you had to overcome?
K.V.M.: Every girl does, especially at [a young] age. I know a lot of girls have had eating disorders, but not me. I’ve been lucky in that I’ve been raised very grounded. I’ve always had my parents’ support. When I’m feeling bad about things, I just call my mom.

WWD: Are there any goals you’d still like to achieve?
K.V.M.: Another Vogue cover would be amazing. I’ve already been modeling for so long; I’m really focused on it. It’s my life now. Hopefully I have many more years in me.